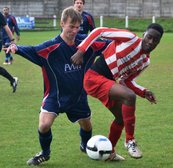 Ellistown & Ibstock Utd recorded a strong victory against opposition a step higher in the non-league pyramid as they put eight goals past Desborough.

It wasn't a good day for goalkeepers or defenders at Terrace Road on Saturday as supporters from both sides witnessed twelve goals scored in this fierce and flowing pre-season friendly.

The attacking prowess of Ellistown & Ibstock was breath taking as Danny Quinn, Richard Lewis, Tendai Chitiza (pictured), Mandeep Bains and Ben Harris proved the undoubted talent of the home side's front five and orchestrated the demise of Desborough Town with fast paced and flowing football from the outset to demolish the step 5 outfit.

It wasn't all positive though as despite skipper Chris Rudkin putting in a strong performance in a deep lying midfield role and screening his back four, United conceded four soft goals throughout the fixture from routine defensive situations and despite the game never being in any doubt will definitely be disappointed with the showing on Saturday from a defensive aspect.

United were 4-1 leaders at half time and there were a further seven goals in the second period to complete the strange but entertaining scoreline. The Ellistown & Ibstock goals were scored by Mandeep Bains (3), Danny Quinn (2), Richard Lewis, Tendai Chitiza and substitute Jack Kyte bagged his fourth goal of the pre-season so far.