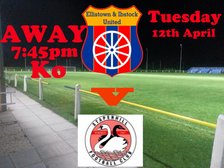 An excellent performance from the lads saw us score a last minute equaliser to leave Stapenhill with a 1-1 draw.

Roared on by the Ellistown & Ibstock away support, we started the game well and could have been 2-0 up after 5 minutes.
We went toe to toe with Stapenhill and this ensured a fast flowing game with plenty of good football.
We should have scored on 12 mins when a rocket shot was turned over the bar by the Stapenhill goalkeeper.
From the resulting corner, Stapenhill broke at pace and within 10 seconds of defending a corner, Alex Britton was through on goal and he made no mistake from 15 yards to make to 1-0.
Stap 1-0 EIBS 13 Mins
The goal inspired us to continue attacking and only “Gordan Banks” goalkeeping, defenders on the line and misplaced final balls stopped us getting back in the game.
Stapenhill while not creating chances were dangerous on the break but our defence was solid and at half-time the game was set-up for a cracking second half.
Stap 1-0 EIBS HT
The second half continued from the 1st half as both teams played football that would not have been out of place in the Champions League.
We started to take more risks and that left gaps at the back to give Stapenhill enough chances to make the game safe.
A combination of great defending and poor finishing ensured chances were not taken. This would prove costly.
We thought we equalised on 80 mins when the Stapenhill goalkeeper could not hold a long shot and the ball rebounded to Ross McGarry who dinked the ball over the Goalkeeper from 5 yards. As we celebrated, we could not believe our eyes as the Goalie somehow managed to claw the ball away for a corner.
With time running out, we threw players forward and it was like the Alamo in the Stapenhill penalty box.
Deep into injury time, we got our rewards when a corner was met by Marc Radforth whose bullet header found the net to make it 1-1.
Stap 1-1 EIBS 94 mins
With the away support screaming at the referee to blow for full time when EIBS were defending and screaming at the referee to let the game continue when we attacking, the referee was relieved to blow for full time with the final score.
Stap 1-1 EIBS

Summary
A great game that we deserved not to lose. Credit to the team who never gave up when we went 1-0 down and with a little more luck would have won this game.
You could see the team playing with confidence. Well done lads.
The draw leaves us in 17th position on 26pts from 33 games. We are 4pts above Arnold Town with +12 goal difference.
We are 2pts behind Holwell Sports and a win against South Normanton Athletic on Saturday could see us climbing to 16th.