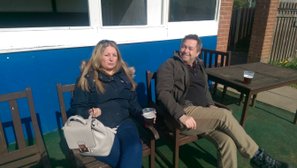 We Had Them Worried

We gave Kimberley the fright of their life as they had to work hard for a 2-1 away victory.

With George Wilkinson pulling the strings in midfield, we contained Kimberley for the first 20 mins and you could see from the Kimberley bench they were getting frustrated.

They blew the door down on 20 mins when a crisp shot from Scott Bailey sneaked into the bottom right hand corner of the goal.

While creating clear cut chances was a problem, we battled to get back into the game and the away team were panicking as the possibility of a half-time rollicking from the Manager grew.

The half time whistle went with the home crowd looking forward to hearing Kimberley's half-time team talk as the score was.

With the stadium still shaking from the Kimberley Manager's half-time team talk that was heard in Coalville. Kimberley started the 2nd half looking for the avalanche of goals there manager expected.

They did not have long to wait as on 50 minutes, Thomas Marshall tapped in from close range.

The expected goal glut much to the frustration of the Kimberley bench and amusement of the home fans never came and it was James Hogan on 84 minutes who got us back in the game with a bullet header.

Kimberley held firm from the EIBS onslaught and it was a relieved away bench who celebrated the final whistle like it was a cup final win, while the players knew what was coming in the dressing room.

A good performance from lads that deserved at least a point. We go again on Tuesday evening when we entertain local rivals Ashby Ivanhoe.