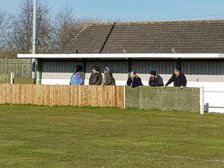 A vital 2-1 victory and 3 points for town against Kirby Muxloe Reserves who do not look like a bottom of the table side.

For the 2nd consecutive week, games between the two evenly matched sides was settled by fine margins.

Kirby started the game well but could not break down an Ellistown defence superbly marshalled by Alsena Sumah and Goalkeeper Julian Waho.

After a tight 20 mins, Ellistown started to gain control and put pressure on the Kirby defence with Mccauley Kenney and Tariq Wilson causing problems down the the flanks.

With Maison Landers playing the Makelele position to perfection and setting up waves of attacks only great goalkeeping from Kirby's Scott Handley and the cross bar stopped Ellistown going into half time with a deserved lead.

Special mention goes to our goalkeeper Julian Waho who managed to dust himself down and continue after a nasty looking "Petr Cech" collision with Kirby's centre forward.

The half-time whistle went with the score.

With the game up for grabs, it was a slow starting Ellistown who should have been punished straight after the restart as Kirby's Ben Smith free header from 10 yards looked destined for the net, only for Julian Waho to pull off a "Gordan Banks-Mexico 1970" world class save.

That shock woke Ellistown up, who quickly gained control of the game and started to buzz around Kirby's penalty area. The break through goal came on 75 minutes, when Mohamed Sumah slotted home from close range after Ibraham Jalloh's initial shot was saved.

With nothing to lose, Kirby started to take chances and with Ellistown still celebrating the goal they equalised on 80 mins when neat approach play led to a defence splitting ball for Andrei Raceala to race on to and score.

Over the 2 games, Kirby deserved a goal and it looked like they could be leaving Terrace Road with a point.

That changed on 87 minutes when a 60 yard run by Joshua Rock ended up with the defender taking a tumble in the penalty box and referee pointing to the spot.

With both sides out on there feet, it was no surprise that Kirby had nothing in the tank to fight back and the final whistle went with the final score of.

Another superb battling performance from the lads against a good Kirby side saw us move 13 points clear of our visitors who occupy the relegation spot. We now have plenty of breathing space as we enter a tough run of fixtures.

The training and your hard work over the last six weeks is now paying off.