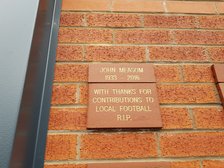 History was made today as Ellistown FC made it seven league wins in a row and equaled our longest winning run that stretched back to 2007.

This was our chance to impress against our big brothers who we aspire to be and boy did we impress.

As expected, the game started with Coalville showing us why there are a class outfit as they pinged the ball around and left Ellistown chasing shadows. They had not factored in our goalkeeper Julian Waho being in top class form as he kept out Coalville attacks.

You sensed if Ellistown could survive the first 15 mins then Coalville would run out of ideas and we would come into the game.

This proved true on 16 mins when some poor Coalville defending allowed Ibrahima Jalloh to open the scoring from close range.

The goal sent our aways fans into dreamland and things would get better as the game changed and Ellistown took control.

With Maison Landers controlling the midfield, Nial George bulldozing the Coalville Defence , Mohamed Soumah & Tariq Wilson causing havoc on the wing and our defence superbly marshalled by Dereck Maruma, Mccauley Kenney, Isaac Lakin, Alseny Soumah and Julian Waho, the only surprise is why it took 35 mins to grab the second.

The second came as a through ball caught out the Coalville back four and allowed Tariq Wilson the simple task of taking the ball around the goalkeeper and scoring into an empty net.

With a shell shocked Coalville side wondering what had hit them, we pushed forward to make the game safe by half-time and only some great goalkeeping from Jack Veitch and some over excited finishing from our forwards stopped Ellistown going in at half time 4 or 5 goals to the good.

With a suspected half-time rollocking, Coalville came out for the 2nd half a different side as they tore into Ellistown and missed some guilt edge chances to get back into the game.

Ellistown were on the ropes but we defended as a team and took the luck that has been missing for the last 2 years.

As our previous six games proved, we are a class act on the counter attack and so this proved on 55 minutes as Mohamed Soumah made it 3-0 by slotting home from close range following a fast counter attack.

Josh Wood dragged Coalville back into the game on 60 mins as he slotted home from 25 yards. Game on.

Ellistown were out on their feet and Coalville had the chances to win the game but Julian Waho's I shall not be beaten attitude and some poor finishing ensured we stayed in the game.

Some great touchline management from Dean and his team ensured Ellistown kept defensive shape and threatened on the break.

Coalville could not break Ellistown down and as the minutes went by, there was more chance of Ellistown scoring a 4th and that happened on the final whistle as another counter attack allowed Mohamed Soumah to cross into the box and with Tom Antill ready to pull the trigger, a Coalville defender slotted the ball into his own goal.

A game that could have ended up 9-10, saw Ellistown make history with a seventh straight league win. Considering the class of our opponents, this is our best result since we knocked Hereford out of the FA Cup back in 2014. Well done to everyone connected to the club.