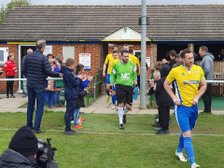 Today proved that Ellistown FC off and on the field are moving in the right direction.

With representatives of the League and BBC Radio Leicester attending and with help of FFA Ellistown the club put on a show to congratulate Rugby Borough on winning the league.

The pre-game guard of honour by our domestic and European winning FFA Ellistown give the respect Rugby deserved. In return, during half-time our Chairman beamed liked a Cheshire cat as he handed out Medals and the European trophy to the FFA Ellistown under 8's.

Special mention goes to Committee Member Trudy Hunt who with the FFA parents ensured our famous Tea Hut was well stocked and the large attendance were fed. While Bernard our Groundsman was kept busy serving in the bar.

The game was a hum dinger played in a swirling wind and both sides deserve enormous credit for putting on a 5 goal thriller with Rugby edging it in the last 10 minutes.

Rugby took an early lead on 10 minutes through Aiden Print with a fine finish after a flowing move,. Then a wind assisted Ellistown took over and with another fine finish Kai Smalley equalised on 20 mins and Adam Gretton with a Lionel Messi Lob on 40 minutes gave Ellistown a first half 2-1 lead.

The wind would play a big part in the 2nd half as it was now Rugby's friend. This proved on 75 minutes when a harmless corner that Sam Boschi had under controlled was picked up by the wind who headed it into the net.

The winner came on 83 minutes when a 30 yard free kick by Sam Beasley was again caught in the wind and flew past Sam. You sensed the celebration was a combination of relief and enjoyment of a successful season.

Ellistown tried to find an equaliser but just come up short. While Rugby took the points in a 3-2 victory. this was a fine effort by the home side.

This game proved how far the club has come this season and next season don't be surprised if Ellistown and Rugby are the teams going for the championship.