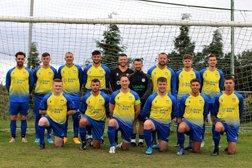 Cottesmore showed today why they are the early season pace setters with a hard fought 4-1 win over Ellistown who for most of the match showed why they are top 4 material.

One of the key differences between league champions and top 4 finishers is low error rates and Town will be kicking themselves as not tracking players and losing players at set pieces cost us crucial goals. We were also not helped by a straight red on 25 mins that meant we had to fight like tigers to get back into the game and boy we came so close.

For the 1st 15 minutes there was not a lot to separate the sides as Ellistown were content to soak up pressure and hit Arron Windram and Benn Minshull on the break.

Then Town had a poor 10 minutes that started on 17 minutes when Colton Cropper was allowed to stand unmarked on the edge of the box and take down a defensive clearance, compose himself and slot the ball home.

Things went back to worse on 25 minutes then fullback George Wesley in a race for the ball on the by-line went for a full force challenge that was mistimed by milliseconds and he got the player and ball. Red Card, and the fact the Cottesmore player stayed on the ground for 10 minutes and was substituted proved the Red Card may have been justified.

Town regrouped with Man Of The Man Owen Brader moving back to fullback to cover George's position. Owen was fantastic and reminded me of Ashley Cole at his Chelsea best. Credit also goes to our other full-back Ash Riddell who played like Liverpool's Andy Robertson.

25 mins in, 1-0 goal down against the league leaders, it was not looking good.

We now had to regroup and battle and boy we done that. We chased and fought for every ball and with River Hardy prompting in midfield, we looked dangerous up-front though we never created the clear cut chances our effort deserved.

Tom Atkins doubled the lead on 41 mins when he headed home unchallenged from a corner.

Only a world class save from Cottesmore's Alex Brown from a River Hardy 25 yard special stopped Town getting back into it before half-time.

The 2nd saw Ellistown on top from the restart as we threw caution to the wind to get back in the game. Yes Cottesmore had chances but they were tiring as Ollie Coe, River Hardy, Arron Windram and Benn Minshull tore into them. With Trafford Pickering making his debut as a 2nd half substitute for Callum York who had run himself into the ground, protecting the back four and spraying the ball around like Ruud Gullit. The only surprise that is took until the 70th minute for Town to get back into it with a debut penalty from Benn Minshull, this was after Aaron Windram was pulled back in the penalty box when through on goal.

5 minutes later, River Hardy was presented with a great chance for the deserved equaliser as a flowing move saw River arriving on the end of the great cross but it was unable to place the ball across the goalkeeper.

This proved crucial as Cottesmore picked off Ellistown on the break to score 2 goals in the final 10 minutes through Tom Pope.

Town could have declared at half-time and settled for a 2-0 defeat, but a brave 2nd performance with risk gave the final score a lop sided view of.

Lads, you've seen what it takes to be a league winner today. A few tweaks and reduction in errors and we will be knocking on the door.

All of you that includes George who apologised to the lads for letting them down should be proud of the performance today. We won't face many Cottesmore's this season so lets regroup and go again next Saturday away to Fleckney.