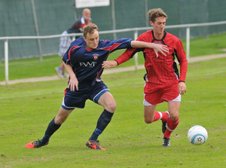 At first glance, it may be thought of as a positive result for the Bull Terriers but standards are a lot higher now at Terrace Road, under the fresh management set-up, and a bizarre brace of decisions from the match officials left United disappointed not to have taken all three points.

Ellistown & Ibstock were by far the better of the two sides from the outset, playing with a newly acquired confidence and their pressure paid off as Richard Wileman met a Chris Rudkin corner with a powerful header that, despite the visiting goalkeeper's efforts, clearly crossed the line by a long way.....but hang on.....unbelievably not given! The remainder of the half was competitive but United creating the stronger pressure and better chances. 0-0 at the interval.

The second period followed a very similar pattern with the home side slightly edging a good football match and always looking more likely than Graham Street Prims to win the fixture. Then came the second outrageous decision of the day with the same linesman involved and clearly struggling with the parameters of a football pitch!!...a goalmouth scramble leads to United defender, Jack Robinson (pictured), shepherding the ball out of play for a goal kick but upon picking up the ball and rolling it to home keeper, Sam Taylor, to take a speedy kick, the decision was somehow reached that the ball had not crossed the line to exit play and Robinson had handled in the box!! No appeal from Prims players, staff or supporters but penalty given...Terrace Road stunned...penalty converted and 0-1 to Graham Street Prims. Ellistown & Ibstock Utd then changed their shape slightly and attacked the game with a fantastic tempo and tenacity, creating (and familiarly missing) a string of good chances before Ben Harris slotted home an equaliser on 86 minutes. The Bull Terriers then had three guilt-edge chances to win the game in the four minutes plus stoppages that remained but neither Sam Hankin or Tendai Chitiza could convert and the points were shared.

After the final whistle, Ellistown & Ibstock Manager, Richard Hill, was stunned, "I have seen some weird and wonderful decisions in my time in the game but today takes the biscuit!" he said, "Two of the most obviously incorrect and bizarre decisions from the officials today have cost us a good victory." added Hill, "But we will move on and continue our good form nevertheless!"

United face a tough away trip to second placed Borrowash Victoria next in their quest for a sixth league game unbeaten and another boost up the East Midlands Counties League table.