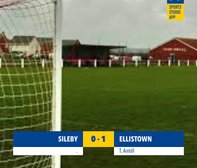 Another great performance from the lads

Ellistown FC with two successive away wins are back in business. The 2nd a hard fought victory v a very good Sileby Town side.

With sixteen players missing through injury and work commitments, we were down to minimum numbers and therefore proud of the 13 players who played yesterday (we are also proud of the 16 missing players) who put in a fantastic performance. Majority of these players played against Pro Chance the previous Tuesday and were out of their feet at the end.

It was a dream 2nd debut for Tom Antill who apart from coming home, scored what was the winning goal on 3 mins when he slotted home after some great attacking play by Arron Windram. The fox in the box is back.

Marshalled by the coaching dream team, we spent rest of the half protecting our lead and suffocating Sileby who were unable to convert several chances that fell there way. Our back 5 were immense, with Goalkeeper Keenan Tielby back to his best after a difficult start to the season. Credit to Ben Worrell who was struggling with injury and managed to make it to half time knowing we had limited numbers on the bench. It was important we kept shape and defending as a team and with Tom Antill holding the ball up front to give us a breather and our flare players tracking back for the team, the plan worked.

With Charlie Grewcock who was returning from injury coming on for Ben, we knew it was important we had to protect, take pressure and take the chances that came our way.

We spent the 2nd half, soaking up pressure and putting bodies on the line, and hitting Tom Antill. Our midfield were brilliant with Aaron Windram linking up play and getting into the face of the Sileby defenders who were getting frustrated. Haydn Brown and James Warren playing like Reece James and Kyle Walker defended the flanks while looking dangerous going forward.

Man Of Match Adam Poxon shall not be beaten attitude at the back, supported by Ashley Riddell's experience and Charlie Grewcock's calming influence.

Captain, Leader, Legend Chris Nettel and unsung hero Harry Hayden put in a shift in midfield that was marshalled by Ollie Coe who put in another Kante performance.

Every player played their part and that included sub keeper James Smith who was prepared to play outfield to ensure we had a fresh set of legs.

Final whistle went with both sides out for the count and Ellistown with the 3 points.

This game was a great advert for grassroot football, players coming off work shifts or preparing to work the night shift, carrying knocks, playing out of position, and then putting on 90 minutes of football.

Well done both sides. Ellistown now go into a 2 week break when hopefully we will a full squad to choose from. Your Ellistown side are in good shape.