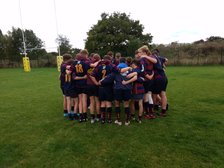 Seaside tour gets off to fine start

Evesham's Under-13s began their tour of cider country with a great win under the floodlights at Weston.

Coach Tom's jitters as to whether he'd actually have a team there on time were put to rest as all the boys except his own dearly beloved son made it in time for the game to start, though one or two parents with ale-instigated double vision probably thought we'd already got 30 of them out there.

Weston proved a good side, but no match for our lads who really did play out of their skins, running and rucking with real intent and playing some fantastic handling rugby. Everyone played so well, including Appleby junior after his late arrival, caused by, of all things, playing football.

Even better than their rugby team was Weston's fantastic hospitality as the boys and us parents were treated to a full roast chicken dinner after the match - a bit too much for some who'd indulged in the M5 Burger King shortly before arrival.

So a winning start and plenty to sing about as boys and parents duly did at that night's karaoke with some hearty renditions of songs you thought you knew, but not when sung like this...... thanks to What's App, what goes on tour doesn't stay on tour anymore.