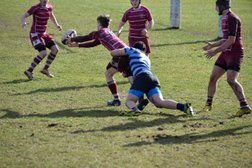 Rochdale have been regular opponents over the years; encounters have been always very tight affairs. So, it was with equal measures of sadness and trepidation that we approached this game, knowing that it was likely to be the last between these two teams at age grade rugby and knowing that we would be in for a battle.

The snow had cleared and the pitch was in pretty good condition. Collegiate had what was one of our largest squads for a game this season (19 players). From the off we could tell we would be in for a close game. Collegiate, usually dominant at the scrum were meeting their match. Though at line out throughout the game we were on top.

The first points of the game went to Rochdale through a well struck penalty through the posts. Collegiate hit back with a try from Joe W and a conversion from Aaron, followed by a penalty of our own from Aaron.

After half time the game continued to be close. Rochdale got a breakaway try under the posts followed by a conversion. Then they managed to creep ahead after a penalty. Collegiate were then down to 14 men after indiscipline from the team. But despite that, Collegiate came right back with a try from Connor that was converted by Steve to take Collegiate back into the lead.

The game seesawed back into Rochdale’s favour after an unconverted try. Rochdale were in front. Collegiate however, with 5 minutes left, made their way back inside their opponents’ twenty two. Collegiate won a penalty with seconds to go. Aaron stepped up and booted the ball between the posts. The ref then blew the full time whistle.

Not the prettiest of wins, but one full of character. Next stop the semi final at home v Widnes on 3 April.