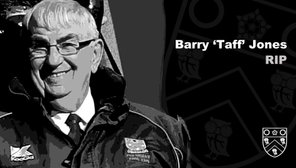 It is with great sadness that I have to report the death of our dear friend Taff at the age of 79. Although he had not been well for a few years he had soldiered on getting to most games over most weekends, Men's, Ladies and Juniors, you could say he was the ultimate supporter. He was admitted to hospital a few of weeks ago but sadly died early this morning.

Taff, a very proud Welshman, joined Oldham many many years ago as tight head prop playing for many of the senior teams at the Club. Retiring from rugby he went on to serve on the committee for some 40years. If you needed a volunteer to do a job, he was the go to man. He was awarded a Red Tie in 1992-93 for Worker of the year, went on to serve two terms as President in 2009-2011 and 2015-2017 and was made an Honorary Member of the club, its highest honour, in 2021.

I could go on for ever about Taff, his humour, generosity and kindness however, I think the best thing to do is link you to his Facebook page and read all the plaudits.

Our condolences go out to Jackie and his brothers Terry and Mark and their extended families.

Details of funeral arrangements will be posted in due course.