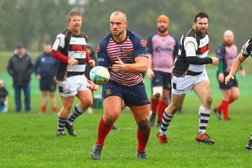 A strong but unpredictable wind, intermittent heavy showers and a greasy surface all contributed in preventing this fixture from being the fast- flowing attacking spectacle normally produced by these 2 sides. Neither has shown the kind of consistent form needed to trouble the league leaders but it was certainly a keen contest with the result in doubt until the last minute.

Oldham took an early lead and dominated the first half through 2 well executed tries by Stuart Brennan and Ryan Arundale and a conversion by Alex Jobson whilst MV replied with a long range penalty.

With the wind now behind them, MV down to 14 men after a red card following some early fireworks, the hardy group of Oldham supporters, oblivious to the worsening weather and conditions looked forward to a comfortable away victory. How foolish of them! MV have always been the most resilient of opponents and Saturday was no exception. Within 10 minutes they were deservedly ahead 13 - 12 after a series of Oldham errors, and began playing with a new found confidence. However , suddenly, and a little out- of- the - blue, Oldham produced a move of considerable skill and execution, the sort they are well capable of on occasions. Swift hands saw Alex Jobson set free from a scrum on the half way line, and using his winger as a foil scorched through on the outside before committing the full back and releasing the supporting Tom Davies to finish the play. A fine conversion by Jobson saw Oldham back ahead 19 -13.

MV came back strongly and reduced the deficit to 3 points but with less than 1 minute left couldn't convert a seemingly straightforward penalty and Oldham celebrated their first win on the road this season.

Oldham owed much to the fine centre partnership of Andy Joy and Matty Fletcher and the back row trio of Stuart Brennan, recapturing the form that made him player of the year 9 years ago and the 2 Ryan’s, Arundale and Pickles.

There is much to praise in this Oldham squad. Effort throughout is first class and a willingness to put bodies on the line is highly commendable, but until there is more composure in attacking situations and consistency throughout the whole 80 minutes, they will not achieve the success of which they are so clearly capable.

Next up Liverpool Collegiate who scored a long range penalty in injury time to take the win at their ground earlier this season. Ignore the current doom and gloom peddled by the media, enjoy the touchline banter and get down to Bardsley to support the lads 2:15 kick off. Saturday 12th of November.