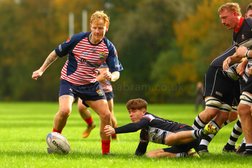 This week we had to negotiate the treacherous journey to Wingates Road to face Wigan. They like us, are at the wrong end of the table so whilst this wasn’t necessarily a must win game, it is one where you would have to fancy your chances. A real challenge was before us though as the results show that they have been highly competitive in most games and ran highly fancied Eccles close a couple of rounds ago.

You need to be well prepared for this journey to Wigan and you would be well advised to ensure that you have an emergency survival kit in your car boot. First bit of advice. Don’t follow satnav as it sends you through Haigh Hall country Park, down what turns into a farm track leaving you knee deep in mud. Second piece of advice......instead take the slip road at junction 6 of the M61. Take the first exit left and then the first exit left at the roundabout in 400m. Turn right at the first set of traffic lights. At the roundabout in Aspull turn left....not right. Third piece of advice.........then turn satnav on. Follow the advice and it is relatively straightforward. Don’t follow the advice and you are knee deep in shit. Anyhow despite three very impressive home wins against Littleborough, Fleetwood and De La Salle, our lack of appetite to travel sees us in the relegation zone. Just as well that we don’t have to make those external journeys up the M6 to Cumbria although I have to admit that I secretly miss the visits to Tebay.

How much damage can a Prime Minister do during the shortest tenure in history? A colossal amount as we have very recently found out and many poor souls will be paying a very heavy price as a result over the next few years. We knew it was going to be a car crash but didn’t anticipate such a sudden and devastating impact. Some clever dick once said with great power comes great responsibility. Obviously, Liz and Kwasi didn't finish their induction and didn't get round to the bit about listening to advice and as a result have ended up in some very deep shit.

You would have thought that after last week's convincing victory against De La Salle that everyone would be desperate to play again this week. But of course, they weren’t. Andy Joy was injured but Tom Davies, Rhys Jones and Billy Buckley weren’t available for different reasons and Louis Fitton was a late cry off due to work commitments with Hooker Jordan McEwan moving to scrum half in his place. Fortunately, Dean McEwan and Jack Sayle had cried on and Jack Taylor, despite medical advice took a place on the bench. But, at kick off time we had only 16 players.

Oldham dominated the early stages with forwards and backs combining to good effect. However, Wigan were resolute in defence and as Oldham's frustration began to grow, they started to give away silly and petty penalties. A series of four successive penalties for unnecessary off sides, not releasing and back chat, which started just outside the Wigan 22, gifted them an attacking line out on our 5m line without them having done very much. They took full advantage of the situation of course and their first visit to our 22 gave them 5-0 lead.

The pattern of the game continued in a similar vein with Oldham dominating the set piece, possession and territory but unable to make an impact on the scoresheet. That changed though when the forwards implemented a training ground catch and drive at a lineout and marched over the line with Tom Hannon touching down to level

the scores. Alex Jobson nailed a difficult conversation from out wide to give us a 5-7 lead. Just before halftime we were awarded a penalty near to halfway. Much to everyone’s amazement Oldham opted for a shot at goal into the wind. We were much more amazed though when Jobson converted to make the halftime score 5-10.

Oldham were good value for the halftime lead. They regularly made ground when in possession, but last gasp mistakes and poor choices meant that chances weren’t converted. We were very secure in defence and despite playing into the elements spent most of the 40 minutes in Wigan territory. The scrum was dominant, and we managed to disrupt their lineout regularly. We tended to come out on top in the big collisions. But the scoreboard did not reflect our dominance and we would have to play every bit as well in the second half.

But to compound the day’s challenges, we lost Oli Ward, who had regularly made good ground, and influential Captain and prop Tom Hannon either side of half time. Fortunately, Jack Taylor had arrived by then so we still had 15 players on the pitch, but Nick Hackman stepped up to prop and hooker Jack Taylor played on the right wing. None of this however changed the pattern of the game, Nick, you are a prop my son, and we had most of the play once again. But the game started to become scrappy, especially at the set piece where our dominance, even without Hannon, was never rewarded. We did, however, produce the best move of the game from a scrum on the Wigan 22. We broke left and Jobson put in xxxxx for a converted try to make the score 5-17 and shortly after a Jobson penalty extended the lead to 5-20, effectively closing out the game. Tempers flared a little in the final 15 minutes or so which led to a series of yellow cards which saw us play almost 10 minutes with only 13 men. Despite this, we maintained set piece dominance and our defensive structure and the final score was 5-20.

Wigan fought hard throughout but struggled to get good quality ball from the set piece and found the Oldham defence to be well organised with good one on one tackling with Mitchell Birch and Joe Taylor showing up well in this department. This wasn't a niggly game in truth and was played in a good spirit until near the end when both sides felt aggrieved at some of the decisions and frustration began to show.

In fairness Oldham were good all over the pitch. Particular praise should be reserved for Jack Sayle and Dean McEwan who both played the full 80 minutes having had very little game time this season due to injury. Their efforts in the front row provided us with good front foot ball all game and on another day, they would have secured a lot of penalties at scrum time. Rob Froggatt, Tom Hannon, Stuart Brennan, Hackman, Ryan Arundale, Greg Higgins and Cameron Wood are big powerful units and are a handful when they are in this kind of mood and form and the Wigan defence struggled to contain them. They kept the Wigan defence very busy, and this provided space and a great platform for the backs. It was necessary to reorganise the backline but you wouldn't have thought so as they combined well in attack and defence and on another day would have scored more points. Our biggest downfall as ever was the lack of discipline which was Wigan’s most potent attacking weapon. This causes stress, frustration and bitching. It needs to stop as it is holding the team back and it happens every week.......even when we are totally in control. How on earth we put ourselves in a position where we are totally in control and thinking about a bonus point, to being reduced to 13 men and having to stress about whether we can hang on is anybody's guess. But hopefully we will learn one day. We also need to accept that you can’t score off every play. Patience is a virtue and if an

attack breaks down sometimes you need to regroup and reset rather than attempt the 1 in 10 chance wonder pass or kick. Better to retain possession as it is often difficult to get back. But hey we backed up a good home win with an away win for the first time this year so job done!!

Well, it comes to something when the changes in personnel in the Government are greater than the weekly changes to the Oldham Rugby team. That is quite some achievement. And there is no sign of it ending soon. It looks as if Boris’s race is run for the time being and Rishi will be left tidying up the mess. We have much pain ahead.

PS if I don’t put this in, then Foxy will and I would prefer it to be in English rather than Fox’s version of Oldhamese. I had two senior moments on Saturday, firstly Mr Jobbo pointed out as I arrived that my headwear sported the colours of the opposition. Then I announced after the game that I had lost my car keys. Foxy, Kev Golland and Old School (President Steve Timmins) had organised a search party along the touchline when they miraculously reappeared in my pocket. I have seen the future and I don't like what I see.