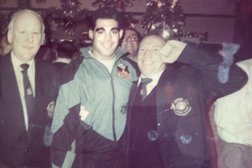 It is with great sadness that I have to report the death of Kenny two days ago after a short illness at the age of 80. Kenny, affectionately known as 'Colonel' in sporting circles around the Oldham and Shaw area, played in the front row for Oldham's Extra A in the 70/80's and went on to do some refereeing. He had a wicked sense of humour. In one game which he refereed, he sent of his great friend Terry Poole for nothing more than looking at him with contempt - they fell out for years! He was a sporting legend in Shaw, playing cricket for Shaw St Paul's for 13 years, 7 as Captain, umpired in the CLL and was Secretary of Shaw Rugby League Club.

Our condolences go out to his Family.

(Kenny is shown on Mal Meninga's right in the photo)