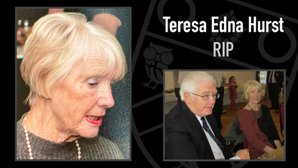 It is with great sadness that I have to report the death of Teresa Edna Hurst. Edna, as she preferred to be called, died early this morning after a long and brave fight with cancer. Edna was the wife of Oldham Rugby Union legend Terry Hurst, Past President and Honorary Member of Oldham Rugby Union who passed away in October 2015.

She was a life member and a great worker for the Club whilst Terry was involved. When I joined in 1966 she was on the Ladies Committee, they had to have their own as Frank Kershaw wouldn’t let them join the main committee! A lovely generous lady who still supported the club and attended the Reunions and Presidents Receptions before ill health took its toll.

She will be sadly missed by all her friends at the Club and on a personal note Lynne and myself will miss her greatly.

Our condolences reach out to her son’s Graham and Tim, her granddaughters, Lucy, Abby, Lily, sister Eileen, and the wider family.

I will forward funeral arrangements in due course.