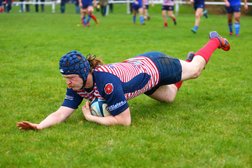 Winter is just around the corner. It must be because Timmo, our President was wearing an overcoat. So it must have been very cold. And it was. Our last fixture in November saw us travel down the East Lancs Road to visit Tyldesley. We haven’t played them for a few years but our merger with the main league pyramid means that our paths cross once more. It was a pretty cold miserable day with rain in the air but the pitch was firm and dry despite all the rain that had fallen during the week.

So if we needed any confirmation about how abysmally poor our political system is, we have been reminded of it every single evening during these past three weeks by that former cabinet minister, who played such a significant role during the covid crisis. His total lack of self-awareness is staggering. How does it make things any better that we see who the real Matt Hancock is? Who cares about him? We know exactly who he is. His lasting legacy is that he was clearly a below average politician with poor moral standards. Nothing else matters. Looking for forgiveness.........do one pal. This silliness is only out ranked by the foolishness of the British public who must have voted to keep him in there.......what a waste of your hard earned money.

Back on the rugby pitch, we had a pretty strong 18 again this week. We were missing influential captain and tight head prop Tom Hannon but looked to have power in the pack and some pace in the backs. We had to hope that we had recovered from the surreal events of 2 weeks ago, fingers very tightly crossed.

You could feel your teeth rattle on the touchline from the very first carry of the game from the kick off by a Tyldesley second row forward. This was continued by two barrelling prop forwards who must have had 1 and 3 on their backs from birth. The Oldham defence creaked under this assault but remained steadfast and kept the white line intact. They quickly recovered and started to match fire with fire and opened the scoring after 15 minutes when we had a four on three and unselfishly went through the hands and Phil Conroy scored in the corner to open up a 0-5 lead. No white line fever for once!! It was nip and tuck for a while after this with both teams relishing the physical nature of the contest.

The moment of the match followed shortly afterwards when the Tyldesley full back put in a huge clearance kick from his own 22, only to see it land in the arms of Alex Jobson. He has some gas and immediately realised that the Tyldesley chase and structure was disorganised. That was an open goal and he danced past isolated defenders, drew the last man and gave Ryan Arundale a free run in beneath the posts. Jobson’s conversion made the halftime score 0-12. What was extra pleasing about this moment of magic is that Jobbo had five players in support as he approached the last man. That is how you convert breaks. Don’t stand and admire.......get on his shoulder and give the ball carrier an option.

Oldham flew out of the blocks at the beginning of the second half and ran in four tries in the first 15 minutes, two converted by Jobson, to open up a 0-38 lead. Firstly, Ryan Pickles drove down the left wing and with amazing leg drive managed to force his way over the line despite the attention of three defenders. From the kick off Nick Hackman burst through three tackles off loaded to Rob Froggatt who charged deep into the 22. Oldham recycled the ball quickly and Brad Jinks touched down in the corner. Next on the score sheet was Jobson who capitalised on a bit of chaos in the Tyldesley defence and hacked the ball into the in goal area and won the chase to touch down. A second from Arundale completed our contribution to the scorecard for the afternoon..

So 38-0 in the lead with 20 minutes to go would feel like job done. But of course, this is Oldham and all of a sudden something changed in the air at Tyldesley. Oldham were twice reduced to 13 men during the last quarter, and at one point to 12, as they received 5 cards for offences that hitherto hadn’t warranted a yellow card. Tyldesley took full advantage of their superior numbers and scored three tries, converting two to make the final score 19-38.

Tyldesley had powerful committed runners all over the pitch and carried with real conviction. The Oldham tackling had to be at its best in order to contain them. There wasn’t a great deal between the teams but Oldham capitalised on nearly every opportunity whereas Tyldesley weren’t able to complete for the first hour. On another day, it could have been a much closer game.

For 60 minutes we witnessed almost an almost perfect Oldham performance. The scrum was dominant with Jack Sayle, dean McEwan and Rhys Jones going forward all afternoon. Hackman was at his destructive best in attack and defence and rolled back the years. But something changed in the last 20 minutes when Oldham picked up 5 yellow cards It was difficult to put your finger on what went on but the way we played the game didn’t change. So there you have it. Some of the defending during this period when we were twice down to 13 men for ten minutes was remarkable.

So the World Cup has commenced at the wrong time of the year in the wrong country with football being played almost 24 hours a day in half empty stadia. There is absolutely nothing right about it. Rules are being made up and broken by FIFA and the host nation almost by the hour. How on earth can such a regime be given a global platform to flaunt it’s intolerance by hosting the biggest sporting event on the planet, FIFA should be ashamed. It is a broken corrupt organisation that desperately requires reform. Don’t blame Qatar. They make no secrets about their beliefs, whatever you might think of them. And they always follow through so don’t say you weren’t warned!! But FIFA? Come on. We should boycott the whole rancid event and watch American Christmas movies instead.

Fleetwood away next week and no coach. Hope we can find our way to the seaside!!!
Dave Roscoe