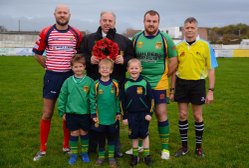 Oldham 1s win on the road

It was a sad week for all at Oldham RUFC following the sad passing of much loved and respected long standing club member Terry Hurst. All our thoughts and condolences are with his family at this time. Terry was a true gentleman and will be missed by all at Oldham RUFC and by the rugby community at large. His is a massive loss and the world is diminished as a consequence.

Rugby continues on a Saturday afternoon however which is exactly what Terry would have wanted and Oldham faced a challenging trip to free-scoring Fleetwood on a day when the weather produced all four seasons within a 4 hour period. In four home games thus far this season Fleetwood have amassed in excess of 200 points and clearly relish playing on their large flat dry pitch. They have played an expansive form of rugby securing 9 bonus points in only 8 games. Oldham lost tough tackling flanker Luke Roscoe to illness at short notice but were able to draft in Alex Jobson and a strong 18 climbed aboard the luxury coach. Oldham were fortunate to benefit from well publicised NHS inefficiencies who cancelled Jordan McEwan’s elbow operation at short notice allowing the new slimline ball playing prop to take a place on the bench.

Oldham had worked hard on the training ground this week and were hoping to build on a hard fought victory in their last outing at home to De la Salle, but no one underestimated the scale of the challenge that the trip up the M6 & M55 presented. The enthusiasm for the task was evident when for the first time in living memory all players arrived early which allowed the coach to depart ahead of schedule. However veteran linesman Mel Garner had not read the script and any time gained was lost as the coach was left idling in a layby on Hollinwood Avenue for 10 minutes as Mel queued for a packet of his favourite polo mints in Morrisons.

Oldham played into the wind in the first half and received a short kick off which was well recovered by pack leader John Souter. Oldham calmly went through a number of phases and received a penalty when Fleetwood lost patience and transgressed at the breakdown. Captain Gareth Barber nudged Oldham into the opposition territory and a further line out following a second penalty saw Oldham form a powerful driving maul which was collapsed illegally on the try line and led to the award of a penalty try and a yellow card. Callum Megram’s conversion made it 7-0 after 3 minutes and the home team had not yet touched the ball. Phil Graham was one of several Oldham players who claimed to have successfully grounded the ball but it is recorded as a team try.

The pattern repeated itself for the next 20 minutes as Oldham displayed dominance in the scrum, with that boy Tom Hannon making a start at loose head and showing skill and maturity beyond his years, both in the set-piece and in the loose and Fleetwood struggled to obtain any kind of good quality possession. Oldham busily disrupted all aspects of their game and when the ball was spread to the backs Oldham’s defensive structure in the three quarters quickly snuffed out any danger with Barber, Josh Watson and Charlie Roscoe maintaining a stout and solid midfield defence. Fleetwood play with passion and aggression but Oldham showed exceptional discipline, occasionally in the face of some over enthusiastic breakdown play, and met fire with fire throughput. It was nothing but a fair reflection of the game when Oldham extended the lead on 15 minutes with Waterhouse picking up at the back of a dominant 5m scrum and driving over. Megram added the conversion to give the visitors a well-deserved 14-0 lead, despite playing into worsening weather conditions.

Corky (Iain MacCorquodale) got out his phone to update Terry on progress as he so often did on a Saturday afternoon. It was a poignant moment which required no words.

Further trouble soon followed for Fleetwood as frustration began to show and they received a second yellow card for a punch following a minor fracas at a breakdown. This after they had been awarded a kickable penalty which the referee promptly and quite rightly reversed. The perceived injustice of this however seemed to spur Fleetwood on and they enjoyed their best passage of the game. Oldham resisted several powerful waves of attack but the defence was eventually breached on 25 mins with a well worked close range try down the left hand side following some deft handling and interchanges between the home side’s backs and forwards. The conversion was missed to leave the score 5-14.

Oldham lost rugged prop Dean McEwan, cousin of new slimline ball handling prop Jordan, and the ever efficient NHS staff were swiftly on hand to treat Dean and take him to the nearby infirmary........our and his thanks to them. This brought Jordan on at tight head but nobody noticed the difference, least of all the home sides loose head and it was business as usual for the Oldham eight.

The weather didn't improve and Oldham appeared content to keep the ball tight and rely on securing the ball at scrum time and the remainder of the first half was played out without any real incident or excitement.

Oldham played with the elements in the second half which now brought us heavy rain and were content to turn the Fleetwood team around at every opportunity and to play deep within their half. It paid dividends almost immediately when they were awarded a penalty on the 10m line that Megram converted with something to spare.

Oldham extended the lead on 55 minutes when they secured good field position in the oppositions 22. Graham made good ground but it appeared that the move had petered out as Barber for once was stationary. However, Will Mellor found him and he put a perfectly weighted kick to the left touch line which Max Horsfall accelerated onto and grounded his own grubber kick in the corner. An excellent kick from the touchline by Megram made it 5-24,

Jamie Edwards continued to hit Ryan North in the line out and North took more than his fair share of opposition ball. Nick Hackman worked tirelessly all afternoon gleefully smashing everything around him. Rob Froggatt and Alec Jobson joined from the bench to good effect. Ryan Pickles might have added to the score line but was denied by a fine last ditch tackle when he appeared to be over the line.

Fleetwood never stopped trying and they continued to throw bodies at the resolute red and white defence to the last and spent 10 minutes in the Oldham 22. But the clouds cleared and a beautiful late autumnal sun revealed itself. Oldham refused to yield and the final whistle came as Oldham repelled the final assault.

This was Oldham’s best performance of the year and to restrict this free scoring Fleetwood team to 5 points was in truth quite an achievement. One can only hope that all players at the club start to believe in the benefits that come from regular training as that is where today’s victory was forged. There is a lot of talent in the club in the ones twos and threes and we have a coaching team that can exploit this. Please encourage your mates to attend.

However, at the end of the day, rugby is only a game and the real issue for us at this time is passing of Terry Hurst. I have no doubt he would enjoyed the coach trip today. God bless.