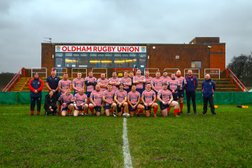 Coach Guy Lovegreen played at scrum-half for the hosts in a much-changed line-up, with Jordan Green at stand-off.

Oldham were in the contest until the half-hour mark, with the score at 12-7, but four tries in the remaining minutes of the first period saw the visitors take a 40-7 lead into the break.

Lovegreen’s men did their best to hold back the tide after the restart, but they conceded a further four tries.

It could have been a different outcome had Oldham made the most of their early possession, which inspired a McEwen try, converted by Lovegreen.

Oldham’s game against De La Salle on Saturday is off, as DLS have to play a rescheduled match at Aspatria.