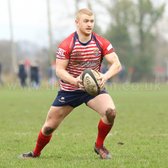 Oldham duly completed a League double over a Burnley side which has struggled all season to replace several quality players who moved to other clubs in higher leagues after helping them to promotion.

Burnley started splendidly and after 20 minutes were ahead 10 -0 before 2 long range tries firstly, by winger Kristaps Lusins and, secondly by centre Charlie Roscoe after lovely handling by Jordan McEwan Ryan North and Gaz Blomeley who returned from a long standing injury. The second converted by Alec Jobson. Burnley replied with a penalty to keep them in contention

On 38 minutes a Ryan North try converted by Jobson who also added a penalty had stretched Oldham’s lead to 22 -13 but a disastrous spell for the visitors just before and after half time saw Oldham pull ahead to 41 13 by the 48th minute. Firstly Ryan arundale, then Alex Jobson and Ryan North ran in tries. The final 30 minutes saw one try apiece -Oldham’s by Josh Watson (meaning all 7 tries had been scored by backs) and Burnley’s Zane Smith after they had gone close on several occasions.

Final tally 48 -18 no injuries ,good pitch and excellently reffed .Burnley were well served by back row Ben Healy and half back Zane Smith whilst Oldham owed much to half backs Jordan McEwan and Josh Watson whose splendid service gave the outside backs room to flourish.

Man of the match was center Charlie Roscoe, who caused Burnley no end of trouble all afternoon (and the refree!) who just pipped young hooker Chris Brown. Full praise to Burnley players and officials for their enthusiasm ,commitment and most of all ,dignity in defeat (a complement that sadly cannot be applied to Cameron, Blair, Osborne, Clegg, Cable, Barnier, "the Hilary" and a multitude of other supercilious politicians who feel they do not have to play to the refs whistle and ,if they moan enough ,he will reverse his decision -oh and of course Brandon & Geldof ) and we at Oldham sincerely hope that when the Lancashire officials, finally, after decades of prevarication, reorganise their ludicrously misnamed and inequitably organised leagues at this level ,Burnley find themselves in a position to regroup and flourish.