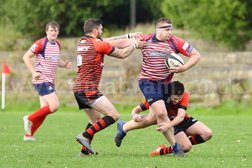 It was a beautiful autumnal day as we continued our voyage of discovery in this new league by welcoming Widnes to Manor Park. After last week’s pulsating victory over Didsbury, you would have thought that we would have had large numbers at training as we make our way into the season. Well you would be wrong because this is Oldham and we are clearly so good that we don’t need to train. I recall when the OG’s joined us and we had just been promoted and wondered how we would cope with the big Cumbrian packs. The OG’s worked on scrummaging during the summer and guess what? We destroyed them all and none of us could really believe it. But that is what training does to a team. Have we all forgotten that? It certainly seems so. If we trained properly, we would be outstanding at this level.

Corbyn had a great chance this week to provide some clarity on how he would deal with the madness that is Brexit. However, he seems even more clueless than Theresa which seems unbelievable. But the reality is that nobody can agree on quite how bad it is going to be. All we do know is that it is going to be bad and we will all be worse off individually and collectively as a consequence. And if you weren’t totally sure about how much of a mess the Labour Party is in, they confirmed this week that they have well and truly hit rock bottom in accepting that Derek Hatton could rejoin the party. This is a man who ruined Liverpool as a city. So he’s not all bad then!

Why do we keep trying to improve bottle necks and problems in our road system? We spend millions and cause misery for months to improve one problem and all that happens is that you move the problem to the next weak spot. Any system is only as strong as its weakest spot and there will always be one. Ok so why not just invest properly in top quality and affordable public transport. Why not promote active travel like walking and cycling and deal with our obesity crisis. None of this is very difficult and we desperately need it as a nation and species.

The opportunities for Oldham to play Widnes have been few and far between over the last couple of decades, there was a Lancashire Cup clash in 1996 when Widnes were well above Oldham in the pyramid and on that occasion it showed. Oldham have risen and Widnes have fallen since those days. This was a keenly anticipated encounter. Oldham were looking to build on the last couple victories, albeit by slender margins, but had Charlie Roscoe and Jack Taylor missing. Rhys Jones got a late call up as prop replacement.

The start of the game was a bit frantic for Oldham and they were lucky to get away unscathed as Widnes battered away at the Home sides line for the first ten minutes, although in all truthfulness it was Widnes trying to force the final pass that was their downfall. The home side lost Luke Roscoe during this period, with a nasty head injury that later required seven stitches. On twenty five minutes Oldham at last made some progress down field when Nick Hackman made a great break, off loaded to Josh Watson who crashed over to the right of the posts. Jordan McEwan added the goal and Oldham had an unlikely 7-0 lead. Just after the half hour Widnes managed to level the scores. After sustained pressure on the Oldham line Sam Bryant was the last player in possession at the back of the maul and touched down to the left of the uprights. Andy Owens added the extra points. On thirty six minutes Oldham gave away a penalty (and then immediately gave away another for mouthing off to the referee- (one of several they gave away thorough the course of the game!). It set Widnes up nicely and from the line out the ball went across the pitch and Pawel Makles crashed over for the try. Owens again added the extra points. Oldham finished the half attacking but the half time whistle stopped any advances they may have had in mind. The story of the half was great defensive work but too many penalties. Half time score - Oldham 7 - 14 Widnes.

The home side started the second half deploying the ‘pick and drive’ but Widnes’ big pack countered well and it became a bit of an arm wrestle. It was mid way through the half before Oldham started to produce some of their best rugby of the game with good runs from John Souter, Rob Froggatt and Nick Hackman but penalties (again) and robust Widnes defence combined to frustrate Oldham in their efforts. It was looking like being a scoreless half but on seventy minutes Rhys Jones took the ball to the try line down the right wing, flipped the ball inside for Bobby Cullen to collect and fall over the line. However the Widnes touch judge deemed Jones was in touch – a very strange decision as he was in the air and well inside the touchline!! Five minutes to go and Oldham started a rolling maul that took them up to and over the line, with John Souter the last player in possession, to score the try. McEwan kicked the goal - all square with three minutes to go. It looked like Oldham had fought back to get a share of the spoils! But then... they contrived to shoot themselves in the foot by conceding a penalty on halfway, Owens stepped up and wasn’t even close to missing. A great kick from just inside his own half to seal the win.

The Manor Park side were their own worst enemies during this game. Having clawed their way back into the game they should have been able to make it safe but giving away penalties, this time, cost them dearly. Nick Hackman was awarded the man of the match for a fine display. It is early days yet and Oldham will play better than they did against Widnes. For Widnes it was their first win of the season while Oldham registered their first defeat, it looks like being a very competitive league.