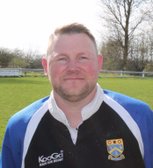 Saturday 14th saw Oldham 3rds travel to Bury for the first round of this year’s Cup. Oldham travelled with a full squad again, which is one of their key improvements this season, and has been a factor in their good results which have put them in second spot in the table. Despite the very poor weather in the week leading up to the fixture, conditions on the day were excellent with a very good pitch surface too.

Bury kicked off, and when Oldham ran back that them it was clear that Oldham had individuals in the team who were going to cause problems for Bury. Ross Cooper, and Dean McEwan were driving hard into contact, and when the ball was coming to the backs, Danny Hill was making good ground every time he had the ball. But the game suffered from handling and technical errors on both sides, meaning there were penalties throughout the game and plenty of scrums. Bury were the first to score, when Oldham made in infringement in their twenty two, resulting in a penalty to Bury which they converted. But Oldham came back strongly, and a quick dart down the left wing from Danny Hill beat Bury’s defence to put Oldham’s first try on the board, which Paul Blomfield converted. The game was alive, and Bury pushed back strongly. After twenty minutes they kicked downfield from just inside the half way line, which was picked up by Jamie Dalloway, who tried to run it back but was immediately caught by the advancing Bury attackers. Oldham had to scramble their defence, putting them on the back foot, and Bury worked a couple of quick phases up to the Oldham try line, and then from a couple of pick and drives put the ball down over the line for their first try.

Again Oldham came back strongly, and after half an hour fed the ball out to Danny Hill on the wing, who used his superior speed to score in the corner. The half time score was 8-12.

Although Oldham had the lead at half time, the play had been untidy, and they were fortunate not to have conceded more points. Changes were made for the second half, including welcoming back Chris Heptonstall in the forwards. The play was better, although there was still a lack of fluency to the game through numerous penalties from both sides. There was no further score in the game, so Oldham were happy to take the win and go through to the second round.

Man of the match went to Kevin Golland for great tackling throughout the game.