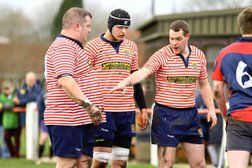 A Bank Holiday Monday fixture was always likely to prove a challenge for Oldham 3rds, especially as the team had already played a rearranged fixture on the Saturday. However, Oldham managed to muster an eighteen player squad, and the game was on. Conditions on the day were relatively good despite a forecast of an imminent storm, and the pitch was in good order.

Oldham made a confident start. Aldwinians were attacking hard from the outset, but Oldham defended well and worked hard to retain their possession once gained. The two sides were appearing well matched, and within five minutes Oldham were awarded a penalty in the Aldwinians half which they elected to go for goal. Ryan Arundale converted the kick, and Oldham had opened the scoring. Now playing on the front foot, Oldham used their full fifteen in driving forward and running wide, making Aldwinians defend hard to keep Oldham out. Fifteen minutes into the game, Oldham were awarded a second penalty from a kickable distance which Ryan Arundale once again put between the posts. With daylight between the two sides on the scoreboard, the outcome was looking favourable for Oldham, and they worked hard to capitalise on their hard earned lead. But after twenty-three minutes Aldwinians had a penalty which they kicked to open their account. The Oldham forwards worked tirelessly, rucking and mauling to disrupt Aldwinians and with considerable success. However, with nine minutes to go in the half Aldwinians scored their first try which they also converted.

In the second half, Aldwinians had the edge overall, but only in that they made the most of their chances. Every member of the Oldham team made a determined effort to tackle, carry and compete. In the scrum, Oldham held their own and ensured they created usable ball. Notable performances in the pack were seen from Jon Maslen and Billy Buckley, Jon carrying well and working hard in the contact, and Billy showing great determination and maturity in making yards and keeping the ball safe even though heavily targeted by his opposition. A great performance was also seen in the backs from Harry Ravenscroft on the wing, who made some great tackles which belied his size. In the end, Aldwinians were able to put three tries on the board in the second half after eight, twenty-four and thirty-six minutes, two of which they converted with quality kicks from out wide. Oldham showed great spirit though and scored a try in the last minute, coming off two successive penalties which they chose to run, and with Adam Waterhouse finally carrying over for the try, which was converted by Ryan Arundale.

Oldham gave a great performance all round, but Aldwinians were the better team on the day, with a performance way over and above their position in the league. Man of the Match went jointly to Jon Maslen and Billy Buckley for their great work in the pack.