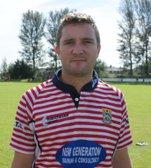 This weekend saw three games at home with both firsts and 3rds playing Aldwinians. The thirds game was on the little used back pitch which had been renovated for this game; unfortunately a number of heavy rain showers in recent days had left the pitch boggy and with standing water in places. Oldham had a strong looking side, and were welcoming back Alan Pierre and Craig Geddy, both of which have not played a great deal so far this season.

The match had an inauspicious start for Oldham with Nick McDowell receiving a nasty cut to the eye in his first tackle; this took him out of the first quarter while he got it patched up. Aldwinians looked like a side who were well drilled and fit, and played the game with pace, accuracy and always good support. They had their first try on the board in minutes, and Oldham were not able to contain them effectively enough to stop them running through for another seven tries in the first half.

In the second half, Oldham had a better organised defence, and managed to break up some of the Aldwinians fluency. Paul Blomfield constantly bothered the attackers in the midfield, and Wayne Hadfield made some excellent tackles before eventually leaving the field prematurely with an injury. Craig Geddy made an excellent contribution on his return, and enabled Oldham to slow down the game to a pace where they could contain Aldwinians better.

Quite clearly Aldwinians had been the better side on the day by some margin. Man of the Match went to Craig Geddy.