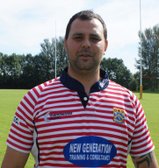 The thirds’ game this weekend was their first home game, and only their second fixture, since Christmas. After a tough year opener last week at Littleborough, this fixture was against a side which Oldham had a close away game against earlier in the season, and therefore looked a strong possibility for a home win. The weather on the day was fine, but a significant rainfall in recent days meant the Knott Lanes pitch was muddy and heavy, meaning conditions were very familiar to the old heads in the thirds.

The game was close and even for much of the first half. Oldham were strong in the pack and fought well in and around the breakdown, and also showed well in the scrum in which they were always solid. Oldham’s best passage in the half came after about twenty five minutes when Oldham had a period of sustained pressure in the Burnage twenty two. Uncharacteristically for Oldham, they had a number of repeat quick-ball phases which presented the Burnage defence with some organisational problems, and Oldham should have had a try but unfortunately lost the ball to a penalty. After thirty two minutes Burnage scored their only try of the game and converted it.

Oldham were the first on the board in the second half after Sean Barratt kicked the ball wide from midfield, and Wayne Hadfield ran onto the ball and carried it over the line, passing it to Matt Dyson at the last minute to score the try. This was converted by Chris Brown. Unfortunately for Oldham, they gave away two kickable penalties in the half, both of which Burnage converted, and this was Oldham’s undoing. Oldham did score another try (Wayne Hadfield after twenty eight minutes), but this was unconverted.

Oldham had been awarded a kickable penalty with only a few minutes to go but some unnecessary verbals meant it was reversed and Oldham lost the game. A lesson for us all to learn. The Man of the Match went to Sean Barratt who played with great tenacity and set up a great first try with a well spotted kick.