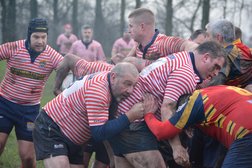 Oldham 3rds came to this game with continued good form and accordingly a high degree of confidence with this being the third home game in a row. Early in the morning conditions were very cold after an icy night and early snowfall, so there were some concerns about the pitches. But by mid-morning it was clear that the pitches were playable with one or two heavy and wet areas. In the afternoon, conditions were good with no wind and some sunshine, so both teams came out for a good old fashioned muddy battle.

Oldham started well and put Bury under pressure from the kick off, and after five minutes Nick McDowell scored twenty yard sprint through the middle of Bury’s defence to put Oldham ahead. Oldham continued strongly and almost had another try from a kick chase, but Jason Green was just beaten to the ball as it crossed the line into the in-goal area. The first ten minutes were all Oldham’s but then Bury had a breakaway try from an Oldham mistake in the Bury half, and Bury were equal again. Now that they were back in the game, Bury played with increased confidence and aggression, and by twenty minutes had scored two further tries, the second of them being another breakaway from an Oldham mistake. It was clear that the game was going to be close and hard fought, and in the twenty ninth minute Bob Webster touched down the ball at the back of a gruelling maul in Bury’s corner. However Bury came back with a further try of their own in the thirty second minute, and the half time score was 10 – 22. One of Oldham’s key strengths had been the scrum, in which they consistently annihilated Bury throughout the game. This was going to prove important in the second half.

Oldham were again the first to show in the second half, this time with a try and a conversion from Chris Brown to bring them within five points. But then in the eleventh minute Bury replied with a try and conversion. This only served to increase Oldham’s determination, and two further tries in the thirteenth and twenty sixth minutes from Stuart Brennan, the second of these converted by Chris Brown, brought Oldham back level. For the remaining ten minutes, the two teams ground it out and couldn’t be separated.