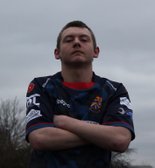 After all the recent bad weather including a brace of eastern beasts, Oldham 3rds were relieved to have a game on at home in excellent conditions. The Knott Lanes pitch was dry and very playable, and the afternoon was a perfect temperature for rugby with little wind. Oldham also had an excellent turn out, with one of the strongest 3rds squads they have turned out this season. There were also a few appearances from returning players who haven’t played for a number of seasons, and these featured Paddy Lockett, Sean Thackwell, Zak Thackwell and Andy Gorey.

From kick off the game went Oldham’s way immediately. Oldham received the ball from the first kick, advanced up the pitch and had the first try on the board from Keith Chadwick inside two minutes. This was converted by Matt Dyson. Within five minutes, Chadwick had scored his second, also converted by Dyson. The pattern for the game was set, and during the first half virtually all the rugby was played in the Spartans half. Spartans tackled vigorously, but they were out-scrummaged in the set piece, and also the Oldham backs proved a handful for the Spartans defence, moving the ball from side to side and stretching the Spartans to leave gaps which they could attack. Matt Dyson was next to score, converting his own try, and then more tries kept the scoreboard ticking over throughout the half including from Nick McDowell, Craig Gedey, Andy Gorey among others.

The second half saw Oldham bring on their full bench and the pattern from the first half continued with a further five tries, this time from Andy Gorey (2), Zak Thackwell (2) and Rob Godley. Part of Oldham’s advantage was neutralised in the second half when Spartans lost their hooker to injury, meaning that the scrum (which was always to Oldham’s advantage) went uncontested. Two minutes from the end, Spartans forced a mistake from the Oldham defence, and they ran through to score a try, which was a just reward for the superb way they had battled through the game to the end.

The final score was 81-5, and Man of the Match went to Matt Dyson for an excellent kicking display on Oldham’s conversions as well as a well taken try of hi s own.

Thanks go to the Oldham players who also put on a Village Spartans shirt due to them turning up one short. These included Chris Heptonstall, Keith Chadwick, Johnnie Leach and Brent Pollitt.