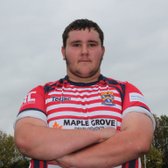 Great performance by a dominant Oldham.

On Saturday Oldham 3rds took a trip to Marple, a club which usually provides a hard fought game with a close result. Their result from the previous week had seen them score over one hundred points against Old Bedians, and so they clearly thought Oldham were going to be a walk over. Many of the Oldham team arrived just before 15.00 due to traffic problems near Romiley, and Marple were out on the pitch warming up for their big win. Conditions were excellent, and Oldham had a job to do.

The first ten minutes of the game found Marple perplexed. They were on the back foot for much of it, and certainly not able to exert the dominance they thought they would have. In fact it was Oldham that were going forwards, and fifteen minutes in, the Oldham forwards drove over a try, with John Charlton putting the ball down. Marple did come back at Oldham with a period of pressure in Oldham’s twenty two. This resulted in Oldham’s first yellow card of the season which saw Nick Middleton in the bin, apparently for the third of three Oldham offences in succession; a questionable decision from an otherwise very good referee. Oldham also lost Mike Green shortly after this due to a partially detached ear, and Mike was replaced by Chris Davis who stayed on for the remainder of the game. Marple did score a try in the first half as a reward for their efforts, but were always struggling to make significant yards with their possession. The Oldham pack was awesome. Every scrum pushed Marple back, often at some pace, and many balls were won against the head. Oldham were superior in the lineout too, and these set plays contributed significantly to Oldham’s dominance. Oldham’s second try of the half came from Luke Ferrier, and a third was scored by Chris Brown just before half time, with Chris converting the try himself. The half time score was 7-17.

Oldham continued to dominate for most of the second half and were rewarded with a further two tries. The first of these was a sixty metre sprint from Luke Ferrier, who nearly expired from the effort, and now wishes he had turned down a few of those pies. The final Oldham try came from Anthony Beswick, and was converted by El-Presidente Chris Davies. This was ten minutes from the end, and Oldham were clearly tired. Marple capitalised and scored two late tries, but these were not enough to assail Oldham’s lead. The final score was 17-29, and Oldham took a superb victory.

Man of the Match went to Billy Buckley, who caused the opposing pack problems throughout the game, and always made good yards with the ball.