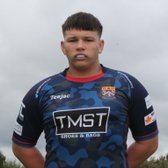 The one thing you can guarantee at the moment when Oldhams third team play is that there will be lots of points, and this game didn’t disappoint. As early as four minutes in Wayne Hadfield chased his own kick through and appeared to get to the ball first over the try line only for the referee, who otherwise had a good game, deemed the Manchester full back got there first. Oldham kept the pressure on and from an attacking 5m scrum the ball went through a few phases before Alan Pierre was held up over the line. Four minutes later good handling eventually went to the hands of Matt Burgess who used his strength to drive over the line for the try. Hadfield converted. Manchester made a couple of rare excursions into the Oldham half via their very quick full back but Oldham hit back on twenty two minutes when Matt Jakeman was first held up over the line and then a minute later forced his way over for an unconverted try. Manchester managed to get on the scoreboard when the centre broke through to score under the posts which was duly converted. Then Oldham made the mistake of giving the ball to the Manchester fullback who scored to the left of the posts, again converted to give Manchester the lead. Just before halftime Hadfield made a great break up the right only to pull up with a hamstring problem, without which Oldham would have gone into halftime in the lead. As it was the halftime score was Manchester 14 - 12 Oldham.

The talk at half time was that Oldham didn’t need to play the game at 100 miles an hour and needed to control the game more. A few minutes into the new half and good handling saw Oldham in a good field position and Dave Ashton was the last in possession to dive over for the try. A few minutes later an almost carbon copy move ended when Hadfield dived over. Ainsley Brooke added the two extra points. On fifty five minutes Manchester came back into the game and scored again via a bizarre mistake in the Oldham in goal error. As the game progressed John Charlton did some great counter rucking to win the ball back, Hadfield made the break and fed Brookes to score. Brookes converted his own try. Just before the final whistle Manchester scored another converted try to leave a final score of Manchester 26 - 31 Oldham.

Oldham’s man of the match was Dan Atkinson for a great all round display.