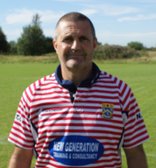 Oldham 3rds were pleased to welcome Bury 2nds to an improved pitch compared with the previous home game when the Knott Lane pitch resembled the Somme. Conditions for the first time in many matches were perfect for rugby, and the 3rds had a full squad of eighteen. Bury also arrived with a full squad including replacements, although a significant number of the side were not familiar from the last meeting, possibly due to the fact that Bury's first team were not playing. Oldham were also welcoming back Mike Green from a lengthy injury received early in the season.

The game kicked off, and as with so many other games this season it became clear very quickly how the pattern of the game was going to run. Bury were strong in the pack, pressurising Oldham in the scrums, and had the tallest player in the county who gave Oldham severe problems in the line outs, and any ball which was fed to their backs was carried forward with superior speed and well-rehearsed moves. Bury started clocking up tries early in the game, and even though Oldham defended vigorously, any Oldham mistakes were punished.

Oldham's sole try came in the first half off a penalty which was kicked to the corner. Oldham threw to the front of the line out and managed to set up a drive which was too much for the Bury pack to defend, and Matt Burgess touched the ball down. The conversion was made by Chris Brown, kicking superbly from out near the touch line and against a cross wind. This try gave Oldham a boost and they played on with their heads up, but struggled to make ground against Bury, unable to contain them in their own half for any significant period.

The second half ran in much the same way as the first. Oldham's brightest moment of the half came when the pack once again showed their strength by driving a maul to Bury's line with Kevin Golland touching down, but the Referee judged it to have been held up, so Oldham had to go back for the scrum instead of celebrating a second try for which they had worked hard. Bury clocked up further tries, in many cases with two and three men overlaps out in the wide channel against which Oldham were unable to defend.

Man of the match went to Nick McDowell who played an outstanding game, especially with his trademark weaving runs in the crowded areas around breakdowns.