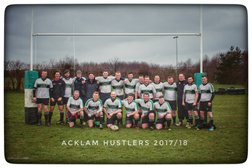 End of season review for the Hustlers

Its a tale of two halves , one a dark hard slog , the other gives a lot of cause for optimism.

To judge our season by our mid table league position would do us a dis-service .

Ours is listed as a social league but it’s not . We’ve battled all season against local clubs who’s 1st xv play the same level or above as our firsts , but their 2nds avoid the talbots to play us .....

Despite this we’ve competed and managed to put a team out for 20+ league fixtures & a few friendlies which really isn’t too shabby for a club of our size .

In those league games we were mullered 8 times , lost normally 5 times , drew once and managed 8 magnificent , beautiful victories.

It begins in Sunny September .

With hopes high we kicked off our season at home to BBOB and a reasonably strong squad lost 15-31 against an ex DN3 team , decent performance & no shame there .

Unfortunately we followed that up with 7 straight defeats, some large, some narrow and the reasons were many :

Quite a few hustlers with experience were called into the talbots , and while its great to see your teammates progress , other players refused to ‘drop down’ to the hustlers leaving us with a skills deficit we couldn’t replace.

Finally , sometimes , the opposition were simply much better than us .

Throughout this , Ralphy & myself kept plugging away , coaxing , cajoling & sometimes begging players to play . We soon discovered we often had better results getting players from other teams turning out for us than we could from our own club. Dark times.

Then on the 4th of November, a shaft of light pierced the gloom and a corner was turned .
We drew a game - not an earth shattering result in the scheme of things but it gave confidence.
It was home to Richmondshire & suddenly life wasn’t so bad at all as we followed it up with an away win to Seaton ( with a team owing much to outsiders from the club and Brad Pluves inspirational management)

Three defeats followed but the final match of 2017 was a cracker .
With only our 3rds playing we travelled to Whitby with a bus load from the club & ran riot . To win again was great but the best part was seeing first team lads who just wanted a game , pull on a shirt , put in a performance and restore some pride for the Hustlers .
It was a great statement to those who saw our 3rd team as beneath them ( & yes , some lads really did say that ) .

New year , fresh optimism .
With the firsts absolutely flying, the talbots well set in their league it was up to us to turn our season around.

What followed next was horrible, we were away to the league leaders & early text exchanges between captains established we could just about fulfil our fixture as we’d scraped together a bare 15 with a fair few of little experience .
They turned up with a squad of 25+ , including some ex 1st teamers & put a 102 points past us . Definitely a social game.......

Luckily the following weekend was free of league fixtures so we went to Redcar for a friendly . Guisboro were meant to make it a mini tournament but they didn’t turn up & our large squad helped us win .

The second half of the season brought the majority of our victories . snow in February wiped out a lot of games but from March through to the end of the season we picked up a further 4 wins .

The most satisfying for me was the home win to Whitby . A great result but a better performance and hopefully a place to build on for next season.

The squad we had that day was a true hustlers team , we had a few experienced heads , lads in their first full season & a few from r2r . I honestly believe if we’d had that team from the start of the season we would be pushing for 2nd / 3rd place .

We finished , as we started with a loss but in a much more positive place than we’d been in for the beginning of the season.

As always I like to name names & there’s a fair few to thank :

First & foremost
Kris Ralph , without him there would be no hustlers.
The amount of graft he puts in every week to get lads to play is unbelievable.
I’d like to say he never moans about it , but I’d be lying . It was brilliant to see him back playing , hopefully next season as captain.

Brad Pluves , with less experience than most he stepped up to run the team when kris & I were working and got all our early results.
Thankyou mate .

Mike , not only helped sort the team but ( when not faking a multitude of injuries) added a lot of quality to the backs . Don’t retire , just man up & practice your kicking :)

Tim for coming out of retirement AGAIN & also helping out with the team . Same goes to Bru , injured but driving 80 mile round trip just to lend a hand .

Marcus , Ray Kelly , Johan & elsey for helping me in all sorts of ways this season.

Jim for sorting out the refs ( god love ‘em)

To all the lads who played hustlers
A lot of work goes into getting you out on that pitch but you’re worth the effort.

It took me the first 8 defeats to realise that if I judged our season & my captaincy on wins in a lopsided league then I’d failed .

A Better target was to make being a hustler something to be proud of , get more lads into the game , help bring youngsters through , improve & push on your teammates and certainly play hard , win where possible but have a laugh & a few pints along the way .

And finally Our Hustlers 2017/18 season started and finished with Tim Faint playing hooker against his old Team BBOB .

As we left him in the company of his old teammates in a pub on the headlands nursing a pint , laughing & swapping stories after a really hard match ,

I smiled to myself .

Rugby really is the best game .

See you next season