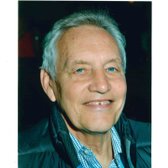 Sadly former player, junior coach, President and founding member Colin Sidgwick passed away following a brave battle with his illness. He will be greatly missed.
Colin supported the club since its formation and helped in numerous ways particularly when times were hard.
Our thoughts are with his family, they have lost a lovely man.
Arrangements have been made for his funeral and we can pay out last respects to Colin as he visits the club one last time at 12.30pm on Tuesday the 29th December.

The funeral car will visit the club car park where we will be able to give our standing respects to him and the family albeit socially distanced our selves.

There will be a tree planted in Colin's memory, recognition of his love and contribution to the club at Talbot Park. Details to be shared at a later date when hopefully we will be able socialise and celebrate Colin's life and mourn his loss together.