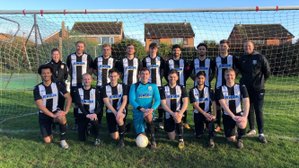 Acle United lost out by a single late goal to Rovers in a game where the A's were the better side overall, and will rue their 3 first ten minute chances that could have sealed the deal.

United looked like the team second in the league as they pinned back their opponents early doors, and it was Man of the Match Aaron Bullent who shot directly at Pauling when clean through with barely 2 minutes on the clock. Then Chris Holmes sent his header straight at the keeper from 6 yards out before Bond through on goal couldn't quite get the job done.
The A's were dominating possession and only a series of fouls broke up the momentum.

Cullumbine raced clear after 20 minutes, in the visitors first meaningful attack of the game but finished high and wide of the upright. Cooper then headed inches wide before another bad foul saw Bond upended and a yellow card issued. Dade was throwing the ball into the box on several occasions and it only looked a matter of time before United took the lead.

Cooper, so dangerous at set pieces in attack nodded on to Bullent, but again Pauling in the away goal saved the day. Aaron Bullent was regularly taken out in the first half, as his pace and strength were too much for the Rovers.

At the other end, from a rare attack , following a corner the ball did go in the Acle net but appeared clearly offside and was ruled out.

Cullumbine looked the only threat to the Acle defence and although he galloped away with the ball just before half time, his effort came to nothing so it was all square at the break.

After the interval Acle scored, but again the goal was clearly offside. Curtis Fulcher returning to the club for his home debut, was running the midfield for the A's, as he saw his 30 yard shot go narrowly over.

Greenslade was winning anything that was marked as a 50/50 ball in the centre of the park. Holmes then had a free kick turned over the bar by the inform Pauling, before Curtis Fulcher turned his man sideways before feeding Forder whose rasping shot was again tipped over by Pauling. Another free kick to Acle saw Ricki Forder pull the ball back from the byeline, before the introduction of Mathew Fulcher saw him win a free kick on the edge of the box.

So with 10 minutes on the clock, Cullumbine lost his marker at the far post to head home and give the Rovers the lead against the run of play.
Forder sent in a cross kicked off the goaline, before Page saw his header saved on the line in a game that Acle deserved to win, and showed just how far Coylys men have come in the last 2 months.