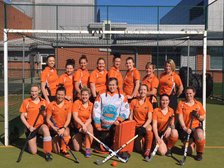 18 YEARS IN THE MAKING

Acomb Hockey Club will see its Ladies 1st XI back playing in the Yorkshire Division 1 next season as they have taken the title and are crowned league champions of Division 2, a huge achievement which they last accomplished in 1999 – 18 years ago.

They had secured promotion in the previous weekend match against Thirsk with a thumping 7-1 win, the bubbles were in order that day for the ladies who knew they had not only secured promotion but the title of champions. The final match of the season last weekend saw no change in the team’s victorious ways and a 3-1 win against Canalside Terriers sealed the season.

Captain Kerry Woods, who has been a playing member of Acomb Hockey Club for over 20 years said ‘During my time at Acomb there have been many ups and downs for the ladies team. This season has been unbelievable and I am so proud of the hard work and dedication that the team has given that has culminated in us being crowned champions’.

Having netted over 30 out of the 77 goals scored for the tangerines this season, Woods adds ‘This year has been amazing for myself on a personal level with not only being top goal scorer but more so having the privilege to play alongside my daughter Kiera. I have seen her develop into a wonderful young player with amazing potential. The ladies team are like family, we have players of all ages and we always pull together to support each other on and off the pitch and that is one of the reasons why we have had such a remarkable season’.

The ladies experienced narrow defeats only twice throughout this season, the first being the first game of 2017. Previous to that the ladies team had been undefeated over an awesome 23 played games stretching back over two seasons to November 2015 making club record history. When asked how the ladies have achieved such an impressive run of successes Woods reveals ‘Some people may think that a season starts with a few friendly fixtures and then into the league but not for us we play Summer League and train throughout the Summer months in hot weather to ensure we were ready for the season ahead and what a season it turned out to be’.

Long-standing Chairman of AHC, Bob Dickenson spoke of the ladies success and said ‘I am so pleased that the ladies team, followed the men's team success the previous season and got promotion from their division. However they went one stage better and won their division by 6 clear points having been top for all but one week in the season just finished. The team operates with a restricted number of players ranging between some senior players and youthful girls and everyone digs in both on and off the pitch. A clear promotion drive at the start of the season brought fresh faces and some excellent training routines organised by Matt Dickenson helped gather momentum on the pitch so much so that the side were unbeaten prior to the Christmas break’.

Commenting on the ethos of York’s Oldest Hockey Club Dickenson said ‘Providing an environment for ladies to play a sport at a reasonable cost is the clubs forte but like any club we have an excellent team of volunteers to ensure players and teams turn up at the right place at the right time with the correct kit’.

With some final words from the ladies skipper, Woods said ‘I would like to personally thank all the ladies who have played this year, for giving time out of your busy lives to play and for anyone who has supported us. To our club umpires Bob Dickenson and David Quarrie and a special thanks to Richard Crossland who has managed the team for most of the season, he has pushed us through some tough games with his half time talks and sheer determination to push us when we felt like giving up - without them all our games would not be possible. The team and I are excited for the challenge that awaits us in Division 1 and hopefully our success will continue’