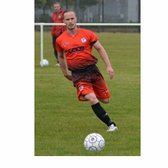 Today it has been confirmed that Richard Jones, One Aldermaston's ever present players has agreed to sign for Hellenic Premier League side Ascot United after they made an approach for him.
Jones joined AFC whilst they were in the Thames Valley Premier League and has seen promotion to the Hellenic League.
In a statement made by Aldermaston manager Keiran Jennings he said 'Dickie will be missed as he's been a good lad in the dressing room, doing the strength and conditiong training and of course on the pitch'
Since joining The Atom Men Jones bagged just a single dubious goal against Wokingham & Embrook just a couple of months previous to this Transfer.

It is from all of the club when i say congratulations to Dickie and Good luck at ascot for the rest of the season.