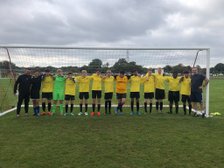 AFC leading until last minute with only 10 players throughout the whole match!

On Saturday AFC Charvil restarted their friendly season with a late afternoon trip to Theale which for many was the furthest they had travelled since the end of December, unless they'd been to Ikea in lockdown!

AFCC could muster only 10 players so started a cold and windy game at an immediate disadvantage. Theale Tigers took advantage going 2-0 up within the first half hour. However, just before half time Beau Ruocco scored a great 30th minute goal to bring AFCC back within contention.

With no substitutions to be made AFCC were back on the pitch with their 10 players after a short rest. Have I already mentioned we only had 10 players?

17 minutes after the restart Beau Ruocco scored his second goal to bring the game back to 2-2. With more fight left in the tank (mixing metaphors) Joe Zambon scored AFCC's 3rd goal in the 56th minute to push Charvil ahead for the first time in the game - did I mention we only had 10 players?? The heat on the pitch was in stark contrast to the shivering parents on the touchline!

The whole of the AFCC team fought bravely, were committed and defended well. Their reserve goalkeeper Samuel Hanks, defending the goal well, couldn't keep out the scowling Theale Tigers who scored their 3rd goal in the dying minutes of the game to earn a draw.

AFCC fought bravely in a very committed and fair manner which is becoming their trait. It was surprising to hear that two of the Tigers ended up in hospital albeit with injuries largely self-inflicted ....

A great start to this unusual fixture in what is turning out to be a very unusual season. Thanks to the lino Andy Stokes who did a great job waving his flag,and to the parents for their support!!

Hi! and welcome to our first match in a while!!

We are playing away at the ungodly hour of 3pm - so can we please meet at 2:15pm.

Note directions to the pitches - its approximately 30 mins drive!