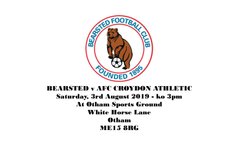 The League season gets underway tomorrow and the Rams are on the road making a trip to Bearsted FC.

It's technically a top of the table clash as second plays first albeit merely thanks to alphabetical order. Early form can be very important as both teams look to settle down their team having cast their eye over players during pre-season to bolster their squads. It is always difficult to predict but all will be hoping to put some points on the board.

Talking to the SCEFL website before the game Bearsted Manager Kevin Stevens seemed confident going into the game. "myself and my management team know we can be a match for anyone and let’s see where that takes us." he said.

Kevin Rayner has similarly been pleased with the pre-season and feels he has strengthened his squad whilst maintaining the core of the side. At its heart is club captain Jamie Thoroughgood who is joined in the back line by the returning Ibrahim Kallon who returns from a spell in Sweden. Kallon previously played 52 times and put in some unforgettable key performances in the back line. The club also sees Nic Taylor returning to play in goal.

Rayner will be giving opportunities to a couple of players as he has to deal with some suspensions that are a hangover from last season. Nevertheless, he will be hoping to start the season as he did last term and to maintain that standard throughout.

Bearsted's ground is situated in Otham, between Bearsted and Maidstone. Remember there are extensive road works on the M20 but on arrival it is a picturesque ground in the countryside with a nice clubhouse.