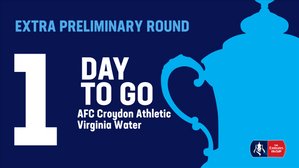 Waters have started their season with a win and a draw having had two home games in the Hellenic League Premier Division. Two goals for Liam Whyte ensured they ran out winners as they head into their first FA Cup tie. Needless to say one of the Rams coaching team was there to cast their eye over the opponents.

Kevin Rayner is digging deep into his squad with up to 8 players unavailable for selection ahead of tomorrow's game. Despite leaving the ground in an ambulance on Tuesday it is possible that Jordan-Boateng Anderson could be in contention and Nahum Green is available to make his first appearance of the season but Abbas Agoro and Jonathan Paoluccio are ruled out whilst Joe Nwoko is also a doubt. Ibrahim Kallon, who picked up a harsh red card last Saturday is suspended.

Should tomorrow's game end in a draw then the two teams will meet in a replay on Tuesday evening at Stag Meadow. The winners of this tie will take on Herne Bay at Winch's Field on Saturday 24th August.

After a couple of games that have carried the possibility of a player going into the "sin bin" this will not be the case tomorrow. This law isn't applicable in the Emirates FA Cup.