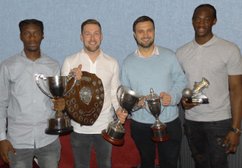 The annual presentation evening took place last Saturday as players were recognised for their contribution during the season.

The evening was kicked off with Manager Kevin Rayner addressing the assembled supporters and players giving his report of the season and the highs and lows. He spoke of the preparations that are already underway for next season with players reporting back in just over a month.

His Manager's Player of the Year went to Captain Jamie Thoroughgood. He made 37 appearances during the season marshalling the defence and also contributed 2 goals. He receive his award from Kevin Rayner.

The Young Player of the Year went to Kazzeem Richards who made 29 appearances and scored his goal at Beckenham Town. His consistent performances and versatility made him a unanimous choice. He received his award from Vice Chairman Alan Powell who sponsored him during the season

Top goal scorer went to Nahum Green. He scored 13 goals in the season including a hat trick at Bearsted. During the season he achieved a century of appearances and he received his award from Club President Martin Bennett.

The Players' Player of the Year, as voted by the players, went to Rob Carter. He made 36 appearances and formed a useful partnership with Thoroughgood. He was presented with his award on behalf of the players by Junior Kaffo.

The Supporters' Player of the Year, as voted by the fans, was shared for the first time. After the votes were counted Nahum Green came in 3rd place but the top two could not be split an the award went to Rob Carter and Jamie Thoroughgood. They received the award from Emma Bashford and Phil Harris on behalf of the fans.

During the evening the unveiled the new kit for next season. The Macron design was first seen at the Junior Presentations last Sunday and will be worn by all the teams in the club for the 2019/20 season.

Check out the photos from the evening including the next kit.