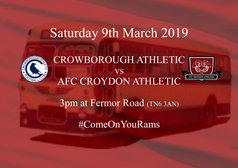 AFC Croydon Athletic make the journey to take on Crowborough Athletic tomorrow looking to turn their recent form around.

The last three games have seen three defeats and haven't scored a goal. Last Saturday's defeat at home to Glebe was a game that they will want to forget whilst the two trips to take on the two FA Vase semi-finalists saw them return empty handed. It is ostensibly the same team that saw off both Sheppey United and Chatham Town a few games ago so no reason to think they can't turn it around at 15th placed Crowborough Athletic.

Crowborough have themselves only won once in the last 5 and have lost their last two outings as they try to lifts themselves up the table. Six places separate the two sides along with 7 points with both teams having played 29 games.

There are some interesting clashes elsewhere. Corinthian who top the table and must now be favourites travel to take on Glebe (13th); Cray Valley PM (2nd) who perhaps will have one eye on their Semi-Final next week are at home to Sheppey United (5th); Fisher (3rd) are at home to Tunbridge Wells (16th); Chatham Town (4th) are at home to Bearsted (12th); Beckenham Town (6th) are at home to K Sports (10th); Canterbury City (7th) will also put their mind off the semi-final and travel to Erith Town (14th); Deal Town (11th) travel to take on Hollands & Blair (18th) and then there is the real six-pointer as Rusthall (19th) travel to Croydon (20th) in the first of two clashes between the two sides in a few weeks.

Sunshine and cloud is the order of the day tomorrow with temperatures rising to 11 degrees. The showers are expected to arrive until the game is over so it shouldn't be an issue for the players.