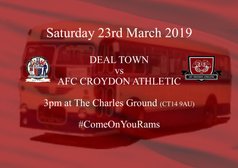 AFC Croydon Athletic make the long journey down to the south coast as they travel to take on Deal Town looking to arrest their recent form.

The Rams are sitting in 11th place and are four points behind Deal Town. But a recent run of defeats amount to the club's worst league run and they'll be looking to change that luck at The Charles Ground. Kevin Rayner will be looking for an improved performance and a good result on the south coast.

By contrast, Deal Town have lost just once in their last five games but that doesn't tell the whole story; they haven't won at home in the league since the end of November.

Elsewhere, top of the table Corinthian don't have a game so second placed Fisher can narrow the gap to just 1 point if they can get a win at Tunbridge Wells (16th); Chatham Town (4th) are at Lordswood (7th); Beckenham Town (5th) are at home to Punjab United (18th); Sheppey United (6th) are at home to Glebe (14th); K Sports (12th) entertain Croydon (20th); Bearsted (13th) are at Rusthall (19th) and Crowborough Athletic (15th) play host to Hollands & Blair (17th).

The big game sees Cray Valley PM take their 1-0 advantage to Canterbury City in the 2nd Leg of the FA Vase. One of those teams will advance to Wembley and we send them both our best wishes.