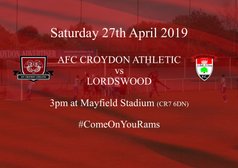 The curtain comes down on the season with the visit of Lordswood to Mayfield Stadium on Saturday with a 3pm kick-off.

For the third time in four seasons these two teams face each other on the last weekend of fixtures. Twice it has been at Lordswood but this season they must make the journey to Thornton Heath.

Lordswood will finish either 10th or 11th this season having secured 52 points from their 37 games so far. By contrast the Rams could move up to 12th but if the results go against them then they could drop to 15th. Lordswood have won just one of the last five games since they beat Corinthian which could be a result that the Hoops rue if they miss out on the title. The Rams have also won one of their last five games but a victory over Chatham Town and a draw with Fisher put paid to both those teams title ambitions.

The title will be decided tomorrow. Favourites are now Cray Valley PM who travel to play Canterbury City needing a win to be certain of the crown. These two teams faced each other in the FA Vase Semi-Final so Canterbury could get a bit of revenge for missing out on Wembley Stadium if they rain on Cray's parade.

Hot on the heels of Cray are Corinthian. The defeat on Monday at Fisher means they trail by a point. They are at home to Bearsted knowing they must win as a draw isn't enough and then hope that Canterbury do them a favour.

A glance to Division One will see that title decided too. Welling Town (1st) can win the title and be guaranteed promotion if they win at Lydd Town (12th) whilst Erith & Belvedere (2nd) will need a point lose in their visit to Snodland Town (15th) if Welling Town. Kennington (3rd) still have an outside chance if Erith slip up and they win at SC Thamesmead (9th).

Some overnight showers will be followed by strengthening wind tomorrow as Storm Hannah drifts past. There is a chance of a shower but it is just as likely they we will catch a glimpse of sunshine too as the afternoon progresses. In contrast to last weekend's temperatures in the mid-20s it will get up to just 11 degrees tomorrow and may feel colder in the breeze.

Rams fans can still vote for their Supporters' Player of the Season at tomorrow's game, make sure you don't miss out.