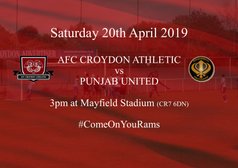 Punjab United are tomorrow's visitors at the Mayfield Stadium as they make their first visit in what for them is still a crucial game.

It is their first season in the Premier Division having won the First Division last season. Of the three promoted teams they have had the most difficult transition but haven't really dropped into the relegation zone although haven't been able to pull away. They currently sit in 18th place and are four points ahead of Rusthall with just the three games to play.

A win and two draws in their last four games have kept their heads above the water line and they will be aware that a win tomorrow accompanied by a defeat for Rusthall in their game at Hollands & Blair will see them safe and condemn Rusthall to finishing in a relegation place.

In the reverse fixture it was a single goal that separated the two sides with Joe Nwoko scoring the winning goal. Kevin Rayner doesn't have Joe in the squad and will be missing Dammy Bada but will welcome Jamie Thoroughgood back into the squad as well as Under 18 player Israel Ospina who is also back after missing the last game.

Recent results have been mixed which make it difficult to predict for tomorrow. In the last 10 games that have secured home and away wins over Chatham Town to put paid to their Championship hopes and drew 0-0 at Fisher last weekend to knock their hopes of the title. Against teams not competing at the top they have been unimpressive.

The weather is better suited for Cricket at Mayfield Stadium tomorrow. It is wall to wall sunshine with temperatures up to 22 or 23 degrees and it could feel even warmer. No chance of rain and a light easterly breeze means it will be perfect conditions for tomorrow's game and what better way to spend your Saturday afternoon.

Tomorrow is also the chance for supporters to vote for their player of the year so make sure you visit the clubhouse and cast your vote.