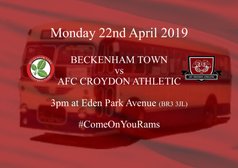 With just two games left the league is pretty much taking shape. Beckenham Town need just a point from the last two games to confirm 5th as their final position. Their recent form has not been good managing just two points from the last four games. On Saturday they slumped to 0-3 defeat at the hands of Canterbury City.

Saturday's defeat to Punjab United had a familiar tone having played well in the first half only to fail to emerge from the dressing room for the second period. It leaves the Rams with a finishing place somewhere between 12th and 15th depending on the final rounds of results.
Kevin Rayner is likely to make a couple of changes particularly with this game coming so close after the last one.

The title still remains in the balance although with the right results it could be settled on Monday. Leaders Corinthian still need to win both games to be certain and they face a difficult challenge at 3rd placed Fisher. Cray Valley PM are just two points behind and know that they also need to win both their games and they start by welcoming Croydon who sit 20th.

The weather promises to continue to be sunny and bright. Temperatures should get up to at least 22 degrees and may be a little hotter. Whether that is hot enough for drinks breaks is a good question although we will no doubt have to wait and see.

Getting to Beckenham Town is straightforward and is close by to Eden Park station and is easily accessible by car just off Upper Elmers End Road. It promises to be a nice day and it known for being a good surface for playing on so it looks like a perfect way to spend a Bank Holiday afternoon!