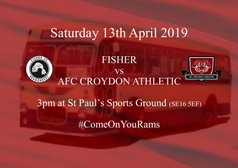 Three Saturdays to go and AFC Croydon Athletic head to the Thames to take on promotion chasing Fisher.

Fisher are still in the running to win the league title although they will need to ensure that don't slip up and will have to hope that both Corinthian (4 pts ahead) and Cray Valley PM (2 pts ahead) both drop points. Chatham Town are sitting fourth a point behind Fisher but have played a game more. Fisher still have to play Corinthian and Chatham Town so that makes the game tomorrow a must win for the Fish.

Fisher have won their last 6 league games and they haven't conceded a goal in their last three games so it is a run that the will want to see continue. In the return fixture it was Fisher who came out on top with a 2-1 win.

Kevin Rayner is still targeting a top half finish despite a disappointing run of results. That might not count for much as promotion hopefuls Chatham Town found out with the Rams completing a double over them in their only two victories in the last 9 games.

With the Kent Senior Trophy Final taking place on Sunday between Chatham Town and Beckenham Town there are just 8 games in the league on Saturday. League leaders Corinthian are at Hollands & Blair (17th); Cray Valley PM (2nd) are at home to Glebe (8th); Sheppey United (6th) are at Bearsted (13th); Erith Town (9th) are at home to Lordswood (10th); Canterbury City (11th) are at K Sports (14th); Crowborough Athletic (15th) are at home to Punjab United (18th) and Tunbridge Wells (16th) are at relegated Croydon (20th).

The weather shouldn't be an issue at Fisher's 3G pitch but it does look like a pleasant afternoon with temperatures creeping up to 8 degrees. A slight chance of a shower in the afternoon but an equal likelihood of sunshine. An easterly breeze could add a little chill to the proceedings.