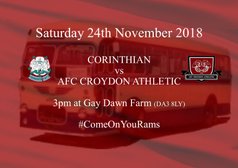 Two for the Price of One

Two Rams sides will take to the field tomorrow and both will be looking to progress in their respective cup competitions.

In form Corinthian are the opposition for in the 2nd Round of the Southern Counties East League Challenge Cup at their Gay Dawn Farm ground. The Rams visited this ground earlier in the season and came away with nothing as the home side ran out 2-1 winners. They sit third although with two games in hand they could conceivably go top. In the first round of this competition they beat Crowborough Athletic 6-0 so it promises to be a real test for the Rams.

Elsewhere, just 15 minutes away, Dan Burnett's embarks on the London Senior Trophy campaign with his team that is more used to midweek U23 competition but they travel to play FC Elmstead. It will be a test for Burnett's side but one he is looking forward to.

It is a Cup weekend set aside for the Kent Senior Trophy for those teams still in the competition. There are three league games, however, with Crowborough Athletic playing Sheppey United, Deal Town playing Erith Town and Punjab United taking on Glebe.

There is some rain forecast for matchday with showers in the morning and some heavier rain in the afternoon. Temperatures will recover a bit from earlier in the week and are expected to rise to 8 degrees.