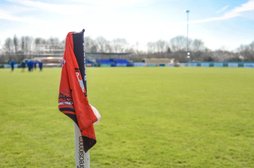 AFC Portchester’s preparations are gathering pace for the new season, with their friendlies schedule almost complete.

Manager Dave Carter has been busy in the close season so far re-signing players from last season’s squad and bringing in new signings as well.

These are expected to be announced in the coming week via the club’s social media channels and website.

Meanwhile the first team’s pre-season training schedule has been drawn up and the hard work for the players will begin next week.

The programme of pre-season friendlies has also been arranged, with just one more fixture to be confirmed.

An in-house game between the first team squad and under-23s squad will be taking place on Tuesday, June 28.

The game is taking place at Havant and Waterlooville’s West Leigh Park stadium and will kick-off at 7pm.

The Royals then head to Southern League side Lymington Town on Saturday, July 2, with kick-off at 3pm.

More Southern League opposition await the Royals on Tuesday, July 5, with a trip to Dorchester Town. Kick-off is at 7.45pm.

Another away evening journey follows on Friday, July 8, with the short trip to Wessex League Division 1 side Folland Sports. Kick-off is at 7.45pm.

An away fixture is still to be arranged for Saturday, July 16, before AFC Portchester head to Southern League side Gosport Borough on Tuesday, July 19.

The first leg of the now annual pre-season cup between the two sides will kick off at 7.45pm.

One of only two home friendlies is then scheduled for Saturday, July 23, and it will bring the visit of National League South side Havant and Waterlooville.

Kick-off for this game at The OnSite Group Stadium is 3pm.

The final friendly before the season starts is on Tuesday, July 26, when the second leg of the pre-season cup against Gosport Borough will take place. Kick-off will be at 7.45pm.

The league season is then expected to get under way on Tuesday, August 2, with the opening round of the FA Cup being played on Saturday, August 6.