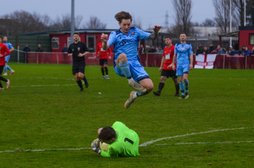 A new date for the postponed Amesbury Town game has been announced - as has the date for the Wessex League Cup semi final tie at Fareham Town.

Following the postponement of yesterday's (Saturday) game at Amesbury, the Wessex League Premier Division game has been re-scheduled for later this month.

The Royals will now head to Wiltshire on Tuesday, January 25, kick-off 7.45pm.

The Wessex League Cup semi final tie against Fareham Town has now been scheduled for Tuesday, March 22. Kick-off at Cams Alders will be 7.45pm.