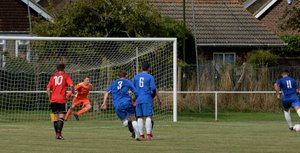 Bradders signs for the V's

A year after injury, Tom Bradford makes another step on the road to recovery

A year ago, the V's were playing Worthing in the Sussex Senior Cup and as a back pass from Charlie Farmer fell a tad short, Bradders came running out, went to clear the ball got his studs caught in the turf and twisted his knee. This has resulted in a lengthy lay off and after a year of rehabilitation (drinking in Poet's Corner) Tom feels he is nearing recovery and so has signed his form. He had badly sprained his ACL and while this may still require an operation, the hope is through muscle strengthening work this will be enough to get him back in between the sticks.

In the meantime as goalkeeping coach he has been great at encouraging both Harvey Parker and Matt Gotel who have benn keeping for the V's this season.