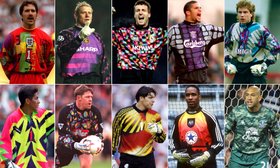 V's lose 5-3 away at Bexhill United

Our first game back after lockdown away at chilly Bexhill, who are in top spot, was always going to be a challenge but one we were looking forward to. There was a bit of kit confusion as we hadn’t been told by Bexhill there were changing to a luminous yellow kit which clashed with our goalkeeper Harvey Parker’s. This resulted in us borrowing a Bexhill goalkeeper shirt which I think they must have got from the bottom of a draw, as it had a distinct 1980’s feel with a massive collar and a QR code style design on the shirt front.

We started the game brightly and Alfie Mitchell had a crisp shot which the Bexhill goalie did well to flick over the bar. Unfortunately that proved to be our only clear chance of the first half as we put in a lack lustre performance countered by a lively one by our opponents. They had a game plan that worked hitting long diagonal passes out to McClean at every opportunity. McClean is a talented player but that being said Tom Barnes, playing at full back, stuck to his task and did well to limit McClean’s effectiveness but of course with his ability he is always going to be a danger.

We struggled to get momentum with too many stray passes and a tendency to play 10 yards deeper than we should have done due to the concern of McClean’s pace with the ball over the top.

We lost left back Alfie Proto-Gates who was squirming in pain with an ankle injury when all of a sudden adrenalin kicked in and the pain switched off to the bemusement of all around. He played on but was clearly struggling and was replaced with Arnie

Bexhill’s two first half goals were initiated as we cheaply gave away possession . The first goal after 20mins as a clearance went straight to McClean who whipped in a speculative cross come shot that Harvey seemed to lose sight of (probably blinded by the pattern of his shirt) and it seemed to go through him into the net. The second goal was a good finished by Sammy Bunn, after a stray midfield pass but the goal was despatched with clinical authority. Bexhill had time to hit the post when it looked easier to score and we went in at half time 2-0 down.

The disappointment was palpable in the dressing room and after agreeing we were collectively playing poorly and not to our best attributes we decided to go a bit more direct to our forwards rather than play through the sticky middle of the pitch.

Bexhill began brightly for the first 5 minutes and then we took control of the game and with Tommy’s pace a trickery upfront causing the Bexhill defence problems, we began to look like a cohesive team with a threat. Joe Keehan was getting more involved in the game winning endless flick ons and it was from one of these that the ball fell to Tommy who with quick feet created space and fired the ball into the far corner. We continued to dominate but of course were always vulnerable to ‘that’ ball out to McClean and it was from one of these passes that he dribbled into our area to be met by a Luke Akehurst tackle which the ref deemed to be a penalty. We naturally thought it was harsh as he played the ball first but the ref disagreed and the penalty was scored for 3-1 by Jamie Bunn.

With 20 minutes remaining many teams would feel sorry for themselves but we reacted positively as we had being playing well and were rewarded quickly with another great finish by Tommy. This rattled Bexhill who had gone into that comfortable feeling of thinking we were dead and buried at 3-1 and had dropped to deep.

Curtis Gayler who had come on at half time was having more and more influence on the game with some decisive passing and energy that had been lacking in the first half. Latching onto a melee on the edge of the area he clipped a shot which took a deflection and looped over the goalie for 3-3.

Those watching were commentating on what an entertaining match it was and at that point we looked the most likely side to go on and win, however, Bexhill are a quality side and showed great resilience to come back at us. Barnes who had been solid as usual got caught in two minds to clear the ball first time or take a touch and did neither and duly fell over. McClean came darting in and also fell over and with the ball loose, like a rugby game players converged on the ball only for it comically to pop out to Evan Archibakd who gratefully smashed the ball into the roof of an empty net. We didn’t see the funny side of it but our heads didn’t drop and Tommy had a clear effort on goal to make it 4-4 only to shoot wide.

As we pushed forward Bexhill once again played the ball to McClean whose perfect first touch set him up to drive into our area and bury the ball bottom corner for 5-3. McClean is a talent, and what is more humble with it, so credit goes where credit is due. The whistle went on a throughly enjoyable game which was a great way to spend a Wednesday night.

Overall Bexhill deserved the victory as they had outplayed us in the first half, but I think at 3-3 their management were relieved to celebrate their fourth goal as at that point the game could have gone either way.

We have been unbeaten away since January 2019 so I suppose at some point we inevitiably would have to accept defeat.

As for the 80’s goalkeeping shirt... it hung forlorn on the changing room hook probably having played it’s last game.